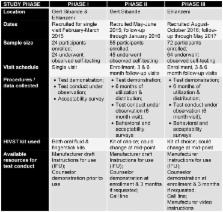 We assessed usability of oral fluid (OF) and fingerstick (FS; blood) HIVST kits during three phases among MSM with differing degrees of HIVST familiarity in Mpumalanga, South Africa. In 2015, 24 HIVST-naïve MSM conducted counselor-observed OF and FS HIVST after brief demonstration. In 2016 and 2017, 45 and 64 MSM with experience using HIVST in a pilot study chose one HIVST to conduct with a counselor-observer present. In addition to written, the latter group had access to video instructions. We assessed frequency of user errors and reported test use ease, changes in error frequency by phase, and covariates associated with correct usage using log-Poisson and Gaussian generalized estimating equations.

MSM were able to perform the OF test. Fingerstick test performance was less consistent; however preference for fingerstick was strong and performance may improve with exposure and instructional resources. Continued efforts to provide accessible instructions are paramount.

The Uptake and Accuracy of Oral Kits for HIV Self-Testing in High HIV Prevalence Setting: A Cross-Sectional Feasibility Study in Blantyre, Malawi

Supervised and Unsupervised Self-Testing for HIV in High- and Low-Risk Populations: A Systematic Review

Competing Interests: Test kit manufacturers Atomo Diagnostics and OraSure Technologies, Inc. donated test kits to the research study, but did not provide any additional funding and had no input into the study design, data collection and analysis, decision to publish, or preparation of the manuscript.

Funded by: funder-id http://dx.doi.org/10.13039/100000025, National Institute of Mental Health;
Award ID: R21MH103038
Award Recipient :
ORCID: http://orcid.org/0000-0003-3152-9372
Sheri A. Lippman
Funded by: funder-id http://dx.doi.org/10.13039/100000030, Centers for Disease Control and Prevention;
Award ID: U2GHH000251
Award Recipient : Tim E Lane
This research was supported by a grant from the National Institutes of Health ( www.nih.gov; R21MH103038 to SAL) and in part by the President’s Emergency Plan for AIDS Relief through the US Department of Health and Human Services and the Centers for Disease Control and Prevention South Africa Country Office under the terms of a Cooperative Agreement ( www.cdc.gov; U2GHH000251 to TEL). HIV self-testing kits were donated by Atomo Diagnostics and OraSure Technologies, Inc. The funders and test kit donors had no role in study design, data collection and analysis, decision to publish, or preparation of the manuscript.

Data Availability Data cannot be shared publicly based on confidentially concerns due to the sensitive nature of the research data and because participants were assured in the consent form that ‘only study managers and investigators will have access to data files’. This assurance may have impacted an individual’s decision to join the study and the UCSF Institutional Review Board will honor that assurance. Those who wish to request access to this data may contact: Laurie Herraiz, RD, CCRP, CIP Director, Human Research Protections Program University of California San Francisco 3333 California St, Ste 315 San Francisco, CA 94118 Tel: 415/514-9246 Fax: 415/502-1347 http://irb.ucsf.edu/ lauire.herraiz@ 123456ucsf.edu
Data availability:
ScienceOpen disciplines: Uncategorized