Treatment adherence and perception in patients on maintenance hemodialysis: a cross – sectional study from Palestine 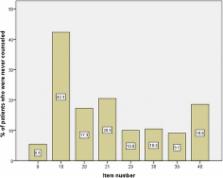 Adherence to diet recommendations, fluid restriction, prescribed medications, and attendance at hemodialysis (HD) sessions are essential for optimal and effective treatment of patients with end-stage renal disease. No data regarding this issue are available from Palestine. Therefore, this study was carried out to assess adherence to diet, fluid restriction, medications, and HD sessions.

A cross-sectional study of HD patients at An-Najah National University Hospital was carried out during summer, 2016. Self-reported adherence behavior was obtained using a valid and reliable questionnaire (End-Stage Renal Disease Adherence Questionnaire: ESRD-AQ). Predialytic serum levels of potassium and phosphate were obtained as clinical indicator of diet and medication adherence respectively. In addition, interdialytic body weight (IDW) was also obtained from medical records and analyzed in relation to reported adherence of fluid restriction.

There was a good percentage of patients who had overall moderate or poor adherence. ESRD-AQ could be used to assess some aspects of HD adherence. Counselling and education of patients on HD are important to improve therapeutic outcome.

A study of the quality of life and cost-utility of renal transplantation.

Self-reported medication adherence and treatment satisfaction in patients with epilepsy.

Ikhlas Jarar,  Adham Taha,  Rana M Jamous … (2011)
Reports about medication adherence and satisfaction in patients with epilepsy in Arab countries are lacking. The objective of this study was to assess medication adherence and its relationship with treatment satisfaction, number of antiepileptic drugs (AEDs) taken, and epilepsy control in a sample of Palestinian patients. This cross-sectional descriptive study was carried out at Al-Makhfya Governmental Outpatient Center in Nablus, Palestine, during the summer of 2010. A convenience sampling method was used to select patients over the study period. Medication adherence was measured using the eight-item Morisky Medication Adherence Scale (MMAS); treatment satisfaction was measured using the Treatment Satisfaction Questionnaire for Medication (TSQM 1.4). Epilepsy was arbitrarily defined as "well controlled" if the patient had had no seizures in the last 3 months and was defined as "poorly controlled" if he or she had had at least one seizure in the last 3 months. A convenience sample of 75 patients was studied. On the basis of the MMAS, 11 patients (14.7%) had a low rate, 37 (49.3%) had a medium rate, and 27 (36%) had a high rate of adherence. Adherence was positively and significantly correlated with age (P=0.02) and duration of illness (P=0.01). No significant difference in adherence was found between patients with well-controlled and those with poorly controlled epilepsy. Similarly, there was no significant difference in adherence between patients on monotherapy and those on polytherapy. Mean satisfaction with respect to effectiveness, side effects, convenience, and global satisfaction were 73.6±20.7, 82.4±29.8, 69.5±15.5, and 68.4±18.3, respectively. There were significant differences in mean values in the effectiveness (P<0.01) and convenience (P<0.01) domains, but not the side effect (P=0.1) and global satisfaction (P=0.08) domains among patients with different levels of adherence. Patients on monotherapy had significantly higher satisfaction in the effectiveness domain (P=0.04) than patients on polytherapy. Similarly, patients with well-controlled epilepsy scored significantly higher in the Effectiveness (P=0.01) and Global Satisfaction (P=0.01) domains than those with poorly controlled epilepsy. In our convenience sample, we found that adherence to and satisfaction with AEDs were moderate and were not associated with seizure control or number of AEDs. Copyright © 2011 Elsevier Inc. All rights reserved.