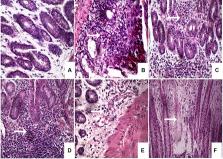 Naringin is a promising anti-inflammatory drug against various disorders including ulcerative colitis. However, its oral bioavailability is low (8%) possibly due to cleavage at the upper gut. Consequently, colon targeting would be necessary for drug protection at the upper gut, enhanced oral bioavailability and potentiated cytoprotection against colitis.

FT-IR and DSC results may indicate drug–polymers interaction during release. Release retardation could be related to polymer swelling that was in the order of SCMC > ALG > EC. SEM examination indicated more porous coats at the buffers relative to the acidic medium. Colon targeting was expected in case of coats of 5% ALG, 5% SCMC and 10% EC (w/w) in combination with EUD-L100-55; thus, they were selected for in vivo evaluation. Effective cytoprotection of selected tablets against indomethacin-induced colitis was indicated by a significant ( P<0.05) reduction in mucosal damage, serum levels of pANCA and TNF-α expression compared to untreated colitis and core-pretreated groups. Compared to EC, higher cytoprotection potential of ALG- and SCMC-based tablets was reflected by lower concentration (5% w/w) to provide cytoprotection against indomethacin-induced colitis.

A Rechner,  Thomas A Smith,  Gunter G. C. Kuhnle … (2004)
The metabolism of chlorogenic acid, naringin, and rutin, representative members of three common families of dietary polyphenols, the hydroxycinnamates, the flavanones, and the flavonols, respectively, was studied in an in vitro mixed culture model of the human colonic microflora. Time- and concentration-dependent degradation of all three compounds was observed, which was associated with the following metabolic events after cleavage of the ester or glycosidic bond: reduction of the aliphatic double bond of the resulting hydroxycinnamate caffeic acid residue; dehydroxylation and ring fission of the heterocyclic C-ring of the resulting deglycosylated flavanone, naringenin, and of the deglycosylated flavonol, quercetin (which differed depending on the substitution). The metabolic events, their sequences, and major phenolic end products, as identified by GC-MS or LC-MS/MS, were elucidated from the structural characteristics of the investigated compounds. The major phenolic end products identified were 3-(3-hydroxyphenyl)-propionic acid for chlorogenic acid, 3-(4-hydroxyphenyl)-propionic acid and 3-phenylpropionic acid for naringin, and 3-hydroxyphenylacetic acid and 3-(3-hydroxyphenyl)-propionic acid for rutin. The degree of degradation of the compounds studied was significantly influenced by the substrate concentration as well as individual variations in the composition of the fecal flora. The results support extensive metabolism of dietary polyphenols in the colon, depending on substrate concentration and residence time, with resultant formation of simple phenolics, which can be considered biomarkers of colonic metabolism if subsequently absorbed. It is also apparent that a relatively small number of phenolic degradation products are formed in the colon from the diverse group of natural polyphenols.

The utility of biomarkers in the diagnosis and therapy of inflammatory bowel disease.

Paul Lewis (2011)
Fecal and serologic biomarkers can be used in the diagnosis and management of inflammatory bowel disease (IBD). Fecal markers such as calprotectin and lactoferrin have been studied for their ability to identify patients with IBD, assess disease activity, and predict relapse. Antibodies against Saccharomyces cerevisiae and perinuclear antineutrophil cytoplasmic proteins have been used in diagnosis of IBD, to distinguish Crohn's disease (CD) from ulcerative colitis, and to predict the risk of complications of CD. Tests for C-reactive protein and erythrocyte sedimentation rate have been used to assess inflammatory processes and predict the course of IBD progression. Levels of drug metabolites and antibodies against therapeutic agents might be measured to determine why patients do not respond to therapy and to select alternative treatments. This review addresses the potential for biomarker assays to improve treatment strategies and challenges to their use and development. Copyright © 2011 AGA Institute. Published by Elsevier Inc. All rights reserved.