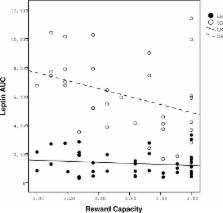 The role of leptin in mesolimbic signaling non-food-related reward has been well established at the pre-clinical level, yet studies in humans are lacking. The present investigation explored the association between hedonic capacity and leptin dynamics, and whether this association differed by BMI class.

In this sample a robust, negative association between reward capacity and circulating leptin was stronger in women with obesity compared to lean counterparts. These findings suggest that despite likely leptin resistance, inhibitory leptin functioning related to non-food reward may be spared in women with obesity.

A scale for the assessment of hedonic tone the Snaith-Hamilton Pleasure Scale.

S Morley,  R Snaith,  P Trigwell … (1995)
Hedonic tone and its absence, anhedonia, are important in psychopathological research, but instruments for their assessment are lengthy and probably culturally biased. A new scale was constructed from the responses of a large sample of the general population to a request to list six situations which afforded pleasure. The most frequent items were reviewed and those likely to be affected by cultural setting, age, or sex were removed. A pilot study led to an abbreviated scale of 14 items, covering four domains of pleasure response. This questionnaire was subjected to psychometric evaluation in new samples from the general population and psychiatric patients. The scale was found to have a score range that would distinguish a 'normal' from an 'abnormal' response. Validity and reliability were found to be satisfactory. The new scale, the Snaith-Hamilton Pleasure Scale (SHAPS), is an instrument which may be recommended for psychopathological research.

Catherine R. Sears,  D Georgescu,  Richard Trinko … (2006)
The leptin hormone is critical for normal food intake and metabolism. While leptin receptor (Lepr) function has been well studied in the hypothalamus, the functional relevance of Lepr expression in the ventral tegmental area (VTA) has not been investigated. The VTA contains dopamine neurons that are important in modulating motivated behavior, addiction, and reward. Here, we show that VTA dopamine neurons express Lepr mRNA and respond to leptin with activation of an intracellular JAK-STAT pathway and a reduction in firing rate. Direct administration of leptin to the VTA caused decreased food intake while long-term RNAi-mediated knockdown of Lepr in the VTA led to increased food intake, locomotor activity, and sensitivity to highly palatable food. These data support a critical role for VTA Lepr in regulating feeding behavior and provide functional evidence for direct action of a peripheral metabolic signal on VTA dopamine neurons.