Bioequivalence evaluation of two amlodipine salts, besylate and orotate, each in a fixed-dose combination with olmesartan in healthy subjects 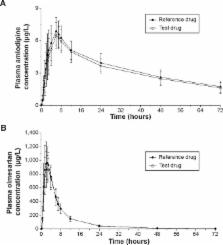 Kevin Catt,  J. Wright,  Marianne Visser … (2000)
The cardiovascular and other actions of angiotensin II (Ang II) are mediated by AT(1) and AT(2) receptors, which are seven transmembrane glycoproteins with 30% sequence similarity. Most species express a single autosomal AT(1) gene, but two related AT(1A) and AT(1B) receptor genes are expressed in rodents. AT(1) receptors are predominantly coupled to G(q/11), and signal through phospholipases A, C, D, inositol phosphates, calcium channels, and a variety of serine/threonine and tyrosine kinases. Many AT(1)-induced growth responses are mediated by transactivation of growth factor receptors. The receptor binding sites for agonist and nonpeptide antagonist ligands have been defined. The latter compounds are as effective as angiotensin converting enzyme inhibitors in cardiovascular diseases but are better tolerated. The AT(2) receptor is expressed at high density during fetal development. It is much less abundant in adult tissues and is up-regulated in pathological conditions. Its signaling pathways include serine and tyrosine phosphatases, phospholipase A(2), nitric oxide, and cyclic guanosine monophosphate. The AT(2) receptor counteracts several of the growth responses initiated by the AT(1) and growth factor receptors. The AT(4) receptor specifically binds Ang IV (Ang 3-8), and is located in brain and kidney. Its signaling mechanisms are unknown, but it influences local blood flow and is associated with cognitive processes and sensory and motor functions. Although AT(1) receptors mediate most of the known actions of Ang II, the AT(2) receptor contributes to the regulation of blood pressure and renal function. The development of specific nonpeptide receptor antagonists has led to major advances in the physiology, pharmacology, and therapy of the renin-angiotensin system.

Bioequivalence and other unresolved issues in generic drug substitution.

Peter Meredith (2003)
Substitution of generic drugs for brand-name products is highly controversial and often is met with suspicion by health care providers and patients. Historically, the debate has focused on the issue of bioequivalence, and clinical practice has identified a number of drug classes for which generic substitution should be approached with caution. Current bioequivalence requirements are based on a measure of average bioequivalence; however, there are fears that use of this measure may be inappropriate in the case of a drug with a narrow or wide therapeutic range or high intrasubject or intersubject variability. Under these circumstances, measures of individual and population bioequivalence are proposed to be more accurate than measures of average bioequivalence. This paper addresses issues of bioequivalence and other concerns with generic drug substitution. I conducted a MEDLINE search of the English-language literature containing the key terms generic, multisource, quality, and brand and published between 1973 and 2003. The names of branded pharmaceuticals whose patents had recently expired (eg, Ventolin HFA, Adalat, Capoten, Tagamet HB 200, and Valium) also were used to search for articles on generic substitution. Reference lists of relevant articles also were searched. Bioequivalence issues are presented together with more general concerns over generic drug substitution, such as consumer perception of risk, differences in product and packaging appearance, and differences in excipients. The literature reviewed act to highlight a number of different drug categories and patient subpopulations for which generic substitution can still prove to be problematic. I recommend that health care providers continue to exercise caution in the consideration of generic drug substitution under certain circumstances.

Effect of CYP3A5*3 genotype on the pharmacokinetics and pharmacodynamics of amlodipine in healthy Korean subjects.