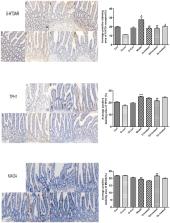 [6]-gingerol is a bioactive compound extracted from ginger, a traditional anti-emetic herb in Chinese medicine. Previous studies have demonstrated that [6]-gingerol can ameliorate chemotherapy-induced pica in rats, although the underlying mechanism has not been elucidated. This study is designed to investigate [6]-gingerol’s antiemetic mechanism focusing on the 5-hydroxytryptamine (serotonin, 5-HT) system by evaluating the synthesis, metabolism and reuptake of 5-HT, as well as the mechanism of 5-hydroxytryptamine type 3 receptor (5-HT 3 receptor), in a cisplatin-induced pica model of rats.

Rats were randomly divided into control group (vehicle + saline, Con), [6]-gingerol control group (50 mg/kg [6]-gingerol + saline, G-con), ondansetron control group (2.6 mg/kg ondansetron + saline, O-con), cisplatin model group (vehicle + cisplatin, Model), ondansetron-treated group (2.6 mg/kg ondansetron + cisplatin, O-treated), high dosage of [6]-gingerol-treated group (100 mg/kg [6]-gingerol + cisplatin, GH-treated), and low dosage of [6]-gingerol-treated group (50 mg/kg [6]-gingerol + cisplatin, GL-treated). The rats were administered with [6]-gingerol, ondansetron, and vehicle (3% Tween-80) by gavage twice (7:00 AM and 7:00 PM). One hour after the first treatment (8:00 AM), rats in groups Model, O-treated, GH-treated and GL-treated were injected intraperitoneally (i.p.) with 6 mg/kg cisplatin, and the other groups were injected i.p. with saline of equal volume. The consumption of kaolin of the rats were measured. All the rats were anesthetized by i.p. injection of pentobarbital sodium at 24 h post-cisplatin. After blood samples were taken, medulla oblongata and ileum were removed. The levels of 5-HT and its metabolite 5-HIAA in ileum, medulla oblongata and serum were determined using high-performance liquid chromatography with electrochemical detection (HPLC-ECD). The mRNA expression levels of 5-HT 3 receptor, tryptophan hydroxylase (TPH), monoamine oxidase A (MAO-A) and serotonin reuptake transporter (SERT) were detected by real-time PCR. The protein expression levels and distribution of 5-HT 3 receptor, TPH and MAO-A in the medulla oblongata and ileum were measured by Western blotting and immunohistochemistry, respectively.

[6]-gingerol treatment significantly reduced the kaolin ingestion and the increase in 5-HT concentration in rats induced by cisplatin. TPH, MAO-A, SERT, and 5-HT 3 receptor are important in 5-HT metabolism, and cisplatin-induced alterations in the associated protein/mRNA levels were restored when treated with [6]-gingerol.

This suggests that the antiemetic effect of [6]-gingerol against cisplatin-induced emesis may be due to 5-HT attenuation via modulating the TPH/MAO-A/SERT/5-HT/5-HT 3 receptor system.

Disruption of the nonneuronal tph1 gene demonstrates the importance of peripheral serotonin in cardiac function.

F Côté,  E Thévenot,  C. Fligny … (2011)
Serotonin (5-HT) controls a wide range of biological functions. In the brain, its implication as a neurotransmitter and in the control of behavioral traits has been largely documented. At the periphery, its modulatory role in physiological processes, such as the cardiovascular function, is still poorly understood. The rate-limiting enzyme of 5-HT synthesis, tryptophan hydroxylase (TPH), is encoded by two genes, the well characterized tph1 gene and a recently identified tph2 gene. In this article, based on the study of a mutant mouse in which the tph1 gene has been inactivated by replacement with the beta-galactosidase gene, we establish that the neuronal tph2 is expressed in neurons of the raphe nuclei and of the myenteric plexus, whereas the nonneuronal tph1, as detected by beta-galactosidase expression, is in the pineal gland and the enterochromaffin cells. Anatomic examination of the mutant mice revealed larger heart sizes than in wild-type mice. Histological investigation indicates that the primary structure of the heart muscle is not affected. Hemodynamic analyses demonstrate abnormal cardiac activity, which ultimately leads to heart failure of the mutant animals. This report links loss of tph1 gene expression, and thus of peripheral 5-HT, to a cardiac dysfunction phenotype. The tph1-/- mutant may be valuable for investigating cardiovascular dysfunction observed in heart failure in humans.

G. Dranitsaris,  A Molassiotis,  M. Clemons … (2017)
Background Despite the availability of effective antiemetics and evidence-based guidelines, up to 40% of cancer patients receiving chemotherapy fail to achieve complete nausea and vomiting control. In addition to type of chemotherapy, several patient-related risk factors for chemotherapy-induced nausea and vomiting (CINV) have been identified. To incorporate these factors into the optimal selection of prophylactic antiemetics, a repeated measures cycle-based model to predict the risk of ≥ grade 2 CINV (≥2 vomiting episodes or a decrease in oral intake due to nausea) from days 0 to 5 post-chemotherapy was developed. Patients and methods Data from 1198 patients enrolled in one of the five non-interventional CINV prospective studies were pooled. Generalized estimating equations were used in a backwards elimination process with the P-value set at <0.05 to identify the relevant predictive factors. A risk scoring algorithm (range 0–32) was then derived from the final model coefficients. Finally, a receiver-operating characteristic curve (ROCC) analysis was done to measure the predictive accuracy of the scoring algorithm. Results Over 4197 chemotherapy cycles, 42.2% of patients experienced ≥grade 2 CINV. Eight risk factors were identified: patient age <60 years, the first two cycles of chemotherapy, anticipatory nausea and vomiting, history of morning sickness, hours of sleep the night before chemotherapy, CINV in the prior cycle, patient self-medication with non-prescribed treatments, and the use of platinum or anthracycline-based regimens. The ROC analysis indicated good predictive accuracy with an area-under-the-curve of 0.69 (95% CI: 0.67–0.70). Before to each cycle of therapy, patients with risk scores ≥16 units would be considered at high risk for developing ≥grade 2 CINV. Conclusions The clinical application of this prediction tool will be an important source of individual patient risk information for the oncology clinician and may enhance patient care by optimizing the use of the antiemetics in a proactive manner.

Serotonin synthesis, release and reuptake in terminals: a mathematical model

Janet Best,  H. Frederik Nijhout,  Warren Reed (2010)
Background Serotonin is a neurotransmitter that has been linked to a wide variety of behaviors including feeding and body-weight regulation, social hierarchies, aggression and suicidality, obsessive compulsive disorder, alcoholism, anxiety, and affective disorders. Full understanding of serotonergic systems in the central nervous system involves genomics, neurochemistry, electrophysiology, and behavior. Though associations have been found between functions at these different levels, in most cases the causal mechanisms are unknown. The scientific issues are daunting but important for human health because of the use of selective serotonin reuptake inhibitors and other pharmacological agents to treat disorders in the serotonergic signaling system. Methods We construct a mathematical model of serotonin synthesis, release, and reuptake in a single serotonergic neuron terminal. The model includes the effects of autoreceptors, the transport of tryptophan into the terminal, and the metabolism of serotonin, as well as the dependence of release on the firing rate. The model is based on real physiology determined experimentally and is compared to experimental data. Results We compare the variations in serotonin and dopamine synthesis due to meals and find that dopamine synthesis is insensitive to the availability of tyrosine but serotonin synthesis is sensitive to the availability of tryptophan. We conduct in silico experiments on the clearance of extracellular serotonin, normally and in the presence of fluoxetine, and compare to experimental data. We study the effects of various polymorphisms in the genes for the serotonin transporter and for tryptophan hydroxylase on synthesis, release, and reuptake. We find that, because of the homeostatic feedback mechanisms of the autoreceptors, the polymorphisms have smaller effects than one expects. We compute the expected steady concentrations of serotonin transporter knockout mice and compare to experimental data. Finally, we study how the properties of the the serotonin transporter and the autoreceptors give rise to the time courses of extracellular serotonin in various projection regions after a dose of fluoxetine. Conclusions Serotonergic systems must respond robustly to important biological signals, while at the same time maintaining homeostasis in the face of normal biological fluctuations in inputs, expression levels, and firing rates. This is accomplished through the cooperative effect of many different homeostatic mechanisms including special properties of the serotonin transporters and the serotonin autoreceptors. Many difficult questions remain in order to fully understand how serotonin biochemistry affects serotonin electrophysiology and vice versa, and how both are changed in the presence of selective serotonin reuptake inhibitors. Mathematical models are useful tools for investigating some of these questions.