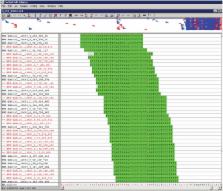 Imprinted genes display differential allelic expression in a manner that depends on the sex of the transmitting parent. The degree of imprinting is often tissue-specific and/or developmental stage-specific, and may be altered in some diseases including cancer. Here we applied Illumina/Solexa sequencing of the transcriptomes of reciprocal F1 mouse neonatal brains and identified 26 genes with parent-of-origin dependent differential allelic expression. Allele-specific Pyrosequencing verified 17 of them, including three novel imprinted genes. The known and novel imprinted genes all are found in proximity to previously reported differentially methylated regions (DMRs). Ten genes known to be imprinted in placenta had sufficient expression levels to attain a read depth that provided statistical power to detect imprinting, and yet all were consistent with non-imprinting in our transcript count data for neonatal brain. Three closely linked and reciprocally imprinted gene pairs were also discovered, and their pattern of expression suggests transcriptional interference. Despite the coverage of more than 5000 genes, this scan only identified three novel imprinted refseq genes in neonatal brain, suggesting that this tissue is nearly exhaustively characterized. This approach has the potential to yield an complete catalog of imprinted genes after application to multiple tissues and developmental stages, shedding light on the mechanism, bioinformatic prediction, and evolution of imprinted genes and diseases associated with genomic imprinting.

The transcriptional landscape of the yeast genome defined by RNA sequencing.

U Nagalakshmi,  Zhong Wang,  K. Waern … (2008)
The identification of untranslated regions, introns, and coding regions within an organism remains challenging. We developed a quantitative sequencing-based method called RNA-Seq for mapping transcribed regions, in which complementary DNA fragments are subjected to high-throughput sequencing and mapped to the genome. We applied RNA-Seq to generate a high-resolution transcriptome map of the yeast genome and demonstrated that most (74.5%) of the nonrepetitive sequence of the yeast genome is transcribed. We confirmed many known and predicted introns and demonstrated that others are not actively used. Alternative initiation codons and upstream open reading frames also were identified for many yeast genes. We also found unexpected 3'-end heterogeneity and the presence of many overlapping genes. These results indicate that the yeast transcriptome is more complex than previously appreciated.

Thomas Dechiara,  Elizabeth J. Robertson,  Argiris Efstratiadis (1991)
We are studying mice that carry a targeted disruption of the gene encoding insulin-like growth factor II (IGF-II). Transmission of this mutation through the male germline results in heterozygous progeny that are growth deficient. In contrast, when the disrupted gene is transmitted maternally, the heterozygous offspring are phenotypically normal. Therefore, the difference in growth phenotypes depends on the type of gamete contributing the mutated allele. Homozygous mutants are indistinguishable in appearance from growth-deficient heterozygous siblings. Nuclease protection and in situ hybridization analyses of the transcripts from the wild-type and mutated alleles indicate that only the paternal allele is expressed in embryos, while the maternal allele is silent. An exception is the choroid plexus and leptomeninges, where both alleles are transcriptionally active. These results demonstrate that IGF-II is indispensable for normal embryonic growth and that the IGF-II gene is subject to tissue-specific parental imprinting.

Frank Sleutels,  Denise Barlow,  Sara R. Zwart (2002)
In genomic imprinting, one of the two parental alleles of an autosomal gene is silenced epigenetically by a cis-acting mechanism. A bidirectional silencer for a 400-kilobase region that contains three imprinted, maternally expressed protein-coding genes (Igf2r/Slc22a2/Slc22a3) has been shown by targeted deletion to be located in a sequence of 3.7 kilobases, which also contains the promoter for the imprinted, paternally expressed non-coding Air RNA. Expression of Air is correlated with repression of all three genes on the paternal allele; however, Air RNA overlaps just one of these genes in an antisense orientation. Here we show, by inserting a polyadenylation signal that truncates 96% of the RNA transcript, that Air RNA is required for silencing. The truncated Air allele maintains imprinted expression and methylation of the Air promoter, but shows complete loss of silencing of the Igf2r/Slc22a2/Slc22a3 gene cluster on the paternal chromosome. Our results indicate that non-coding RNAs have an active role in genomic imprinting.

Publisher ID: 08-PONE-RA-06062R2
DOI: 10.1371/journal.pone.0003839
PMC ID: 2585789
PubMed ID: 19052635
Copyright statement: Wang et al. This is an open-access article distributed under the terms of the Creative Commons Attribution License, which permits unrestricted use, distribution, and reproduction in any medium, provided the original author and source are credited.