Mortality, morbidity, and risk factors in China and its provinces, 1990–2017: a systematic analysis for the Global Burden of Disease Study 2017 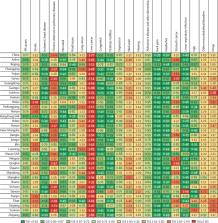 Public health is a priority for the Chinese Government. Evidence-based decision making for health at the province level in China, which is home to a fifth of the global population, is of paramount importance. This analysis uses data from the Global Burden of Diseases, Injuries, and Risk Factors Study (GBD) 2017 to help inform decision making and monitor progress on health at the province level.

We used the methods in GBD 2017 to analyse health patterns in the 34 province-level administrative units in China from 1990 to 2017. We estimated all-cause and cause-specific mortality, years of life lost (YLLs), years lived with disability (YLDs), disability-adjusted life-years (DALYs), summary exposure values (SEVs), and attributable risk. We compared the observed results with expected values estimated based on the Socio-demographic Index (SDI).

Stroke and ischaemic heart disease were the leading causes of death and DALYs at the national level in China in 2017. Age-standardised DALYs per 100 000 population decreased by 33·1% (95% uncertainty interval [UI] 29·8 to 37·4) for stroke and increased by 4·6% (–3·3 to 10·7) for ischaemic heart disease from 1990 to 2017. Age-standardised stroke, ischaemic heart disease, lung cancer, chronic obstructive pulmonary disease, and liver cancer were the five leading causes of YLLs in 2017. Musculoskeletal disorders, mental health disorders, and sense organ diseases were the three leading causes of YLDs in 2017, and high systolic blood pressure, smoking, high-sodium diet, and ambient particulate matter pollution were among the leading four risk factors contributing to deaths and DALYs. All provinces had higher than expected DALYs per 100 000 population for liver cancer, with the observed to expected ratio ranging from 2·04 to 6·88. The all-cause age-standardised DALYs per 100 000 population were lower than expected in all provinces in 2017, and among the top 20 level 3 causes were lower than expected for ischaemic heart disease, Alzheimer's disease, headache disorder, and low back pain. The largest percentage change at the national level in age-standardised SEVs among the top ten leading risk factors was in high body-mass index (185%, 95% UI 113·1 to 247·7]), followed by ambient particulate matter pollution (88·5%, 66·4 to 116·4).

China has made substantial progress in reducing the burden of many diseases and disabilities. Strategies targeting chronic diseases, particularly in the elderly, should be prioritised in the expanding Chinese health-care system.

Urbanisation and health in China

Peng Gong, Song Liang, Elizabeth J. Carlton … (2012)
Summary China has seen the largest human migration in history, and the country's rapid urbanisation has important consequences for public health. A provincial analysis of its urbanisation trends shows shifting and accelerating rural-to-urban migration across the country and accompanying rapid increases in city size and population. The growing disease burden in urban areas attributable to nutrition and lifestyle choices is a major public health challenge, as are troubling disparities in health-care access, vaccination coverage, and accidents and injuries in China's rural-to-urban migrant population. Urban environmental quality, including air and water pollution, contributes to disease both in urban and in rural areas, and traffic-related accidents pose a major public health threat as the country becomes increasingly motorised. To address the health challenges and maximise the benefits that accompany this rapid urbanisation, innovative health policies focused on the needs of migrants and research that could close knowledge gaps on urban population exposures are needed.

Xiaofeng Liang, Shengli Bi, Weizhong Yang … (2009)
To determine the prevalence of hepatitis B surface antigen (HBsAg), hepatitis B surface antibody (anti-HBs), and hepatitis B core anti-body (anti-HBc) in a representative population in China 14 years after introduction of hepatitis B vaccination of infants. National serosurvey, with participants selected by multi-stage random sampling. Demographics and hepatitis B vaccination history collected by questionnaire and review of vaccination records, and serum tested for HBsAg, antibody to anti-HBc and anti-HBs by ELISA. The weighted prevalences of HBsAg, anti-HBs and anti-HBc for Chinese population aged 1-59 years were 7.2%, 50.1%, 34.1%, respectively. HBsAg prevalence was greatly diminished among those age <15 years compared to that found in the 1992 national serosurvey, and among children age <5 years was only 1.0% (90% reduction). Reduced HBsAg prevalence was strongly associated with vaccination among all age groups. HBsAg risk in adults was associated with male sex, Western region, and certain ethnic groups and occupations while risk in children included birth at home or smaller hospitals, older age, and certain ethnic groups (Zhuang and other). China has already reached the national goal of reducing HBsAg prevalence to less than 1% among children under 5 years and has prevented an estimated 16-20 million HBV carriers through hepatitis B vaccination of infants. Immunization program should be further strengthened to reach those remaining at highest risk.