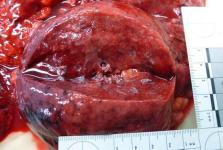 Forensic medicine and pathology involve specific health risks, whereby health workers are dealing with microorganisms, cells or parasites, which are referred to as biological agents. Biological agents are divided into four categories according to § 3 of the Biological Agents Ordinance. The newly identified coronavirus, severe acute respiratory syndrome, coronavirus 2 (SARS-CoV-2) that has spread rapidly around the world is placed into category 3 of the Biological Agents Ordinance, meaning pathogens that can cause serious illnesses in humans and may pose a risk to workers. The Robert Koch Institute, the German government’s central scientific institution in the field of biomedicine issued the announcement, that aerosol-producing measures (including autopsies) of SARS-CoV‑2 infected bodies should be avoided, despite the fact that autopsies are an important source of understanding the pathomorphological course of new diseases. The first German case of death due to a proven SARS-CoV‑2 infection is presented with global multifocal reticular consolidation in the post-mortem computed tomography (CT) scan, a macroscopic and microscopic viral pneumonia and viral RNA of SARS-CoV‑2 in pharyngeal mucosa and lung tissue.

Zsuzsanna Varga, Andreas J. Flammer, Peter Steiger … (2020)
Cardiovascular complications are rapidly emerging as a key threat in coronavirus disease 2019 (COVID-19) in addition to respiratory disease. The mechanisms underlying the disproportionate effect of severe acute respiratory syndrome coronavirus 2 (SARS-CoV-2) infection on patients with cardiovascular comorbidities, however, remain incompletely understood.1, 2 SARS-CoV-2 infects the host using the angiotensin converting enzyme 2 (ACE2) receptor, which is expressed in several organs, including the lung, heart, kidney, and intestine. ACE2 receptors are also expressed by endothelial cells. 3 Whether vascular derangements in COVID-19 are due to endothelial cell involvement by the virus is currently unknown. Intriguingly, SARS-CoV-2 can directly infect engineered human blood vessel organoids in vitro. 4 Here we demonstrate endothelial cell involvement across vascular beds of different organs in a series of patients with COVID-19 (further case details are provided in the appendix). Patient 1 was a male renal transplant recipient, aged 71 years, with coronary artery disease and arterial hypertension. The patient's condition deteriorated following COVID-19 diagnosis, and he required mechanical ventilation. Multisystem organ failure occurred, and the patient died on day 8. Post-mortem analysis of the transplanted kidney by electron microscopy revealed viral inclusion structures in endothelial cells (figure A, B ). In histological analyses, we found an accumulation of inflammatory cells associated with endothelium, as well as apoptotic bodies, in the heart, the small bowel (figure C) and lung (figure D). An accumulation of mononuclear cells was found in the lung, and most small lung vessels appeared congested. Figure Pathology of endothelial cell dysfunction in COVID-19 (A, B) Electron microscopy of kidney tissue shows viral inclusion bodies in a peritubular space and viral particles in endothelial cells of the glomerular capillary loops. Aggregates of viral particles (arrow) appear with dense circular surface and lucid centre. The asterisk in panel B marks peritubular space consistent with capillary containing viral particles. The inset in panel B shows the glomerular basement membrane with endothelial cell and a viral particle (arrow; about 150 nm in diameter). (C) Small bowel resection specimen of patient 3, stained with haematoxylin and eosin. Arrows point to dominant mononuclear cell infiltrates within the intima along the lumen of many vessels. The inset of panel C shows an immunohistochemical staining of caspase 3 in small bowel specimens from serial section of tissue described in panel D. Staining patterns were consistent with apoptosis of endothelial cells and mononuclear cells observed in the haematoxylin-eosin-stained sections, indicating that apoptosis is induced in a substantial proportion of these cells. (D) Post-mortem lung specimen stained with haematoxylin and eosin showed thickened lung septa, including a large arterial vessel with mononuclear and neutrophilic infiltration (arrow in upper inset). The lower inset shows an immunohistochemical staining of caspase 3 on the same lung specimen; these staining patterns were consistent with apoptosis of endothelial cells and mononuclear cells observed in the haematoxylin-eosin-stained sections. COVID-19=coronavirus disease 2019. Patient 2 was a woman, aged 58 years, with diabetes, arterial hypertension, and obesity. She developed progressive respiratory failure due to COVID-19 and subsequently developed multi-organ failure and needed renal replacement therapy. On day 16, mesenteric ischaemia prompted removal of necrotic small intestine. Circulatory failure occurred in the setting of right heart failure consequent to an ST-segment elevation myocardial infarction, and cardiac arrest resulted in death. Post-mortem histology revealed lymphocytic endotheliitis in lung, heart, kidney, and liver as well as liver cell necrosis. We found histological evidence of myocardial infarction but no sign of lymphocytic myocarditis. Histology of the small intestine showed endotheliitis (endothelialitis) of the submucosal vessels. Patient 3 was a man, aged 69 years, with hypertension who developed respiratory failure as a result of COVID-19 and required mechanical ventilation. Echocardiography showed reduced left ventricular ejection fraction. Circulatory collapse ensued with mesenteric ischaemia, and small intestine resection was performed, but the patient survived. Histology of the small intestine resection revealed prominent endotheliitis of the submucosal vessels and apoptotic bodies (figure C). We found evidence of direct viral infection of the endothelial cell and diffuse endothelial inflammation. Although the virus uses ACE2 receptor expressed by pneumocytes in the epithelial alveolar lining to infect the host, thereby causing lung injury, the ACE2 receptor is also widely expressed on endothelial cells, which traverse multiple organs. 3 Recruitment of immune cells, either by direct viral infection of the endothelium or immune-mediated, can result in widespread endothelial dysfunction associated with apoptosis (figure D). The vascular endothelium is an active paracrine, endocrine, and autocrine organ that is indispensable for the regulation of vascular tone and the maintenance of vascular homoeostasis. 5 Endothelial dysfunction is a principal determinant of microvascular dysfunction by shifting the vascular equilibrium towards more vasoconstriction with subsequent organ ischaemia, inflammation with associated tissue oedema, and a pro-coagulant state. 6 Our findings show the presence of viral elements within endothelial cells and an accumulation of inflammatory cells, with evidence of endothelial and inflammatory cell death. These findings suggest that SARS-CoV-2 infection facilitates the induction of endotheliitis in several organs as a direct consequence of viral involvement (as noted with presence of viral bodies) and of the host inflammatory response. In addition, induction of apoptosis and pyroptosis might have an important role in endothelial cell injury in patients with COVID-19. COVID-19-endotheliitis could explain the systemic impaired microcirculatory function in different vascular beds and their clinical sequelae in patients with COVID-19. This hypothesis provides a rationale for therapies to stabilise the endothelium while tackling viral replication, particularly with anti-inflammatory anti-cytokine drugs, ACE inhibitors, and statins.7, 8, 9, 10, 11 This strategy could be particularly relevant for vulnerable patients with pre-existing endothelial dysfunction, which is associated with male sex, smoking, hypertension, diabetes, obesity, and established cardiovascular disease, all of which are associated with adverse outcomes in COVID-19.

Autopsy Findings and Venous Thromboembolism in Patients With COVID-19

Dominic Wichmann, Jan-Peter Sperhake, Marc Lütgehetmann … (2020)
Background: The new coronavirus, severe acute respiratory syndrome coronavirus-2 (SARS–CoV-2), has caused more than 210 000 deaths worldwide. However, little is known about the causes of death and the virus's pathologic features. Objective: To validate and compare clinical findings with data from medical autopsy, virtual autopsy, and virologic tests. Design: Prospective cohort study. Setting: Autopsies performed at a single academic medical center, as mandated by the German federal state of Hamburg for patients dying with a polymerase chain reaction–confirmed diagnosis of COVID-19. Patients: The first 12 consecutive COVID-19–positive deaths. Measurements: Complete autopsy, including postmortem computed tomography and histopathologic and virologic analysis, was performed. Clinical data and medical course were evaluated. Results: Median patient age was 73 years (range, 52 to 87 years), 75% of patients were male, and death occurred in the hospital (n = 10) or outpatient sector (n = 2). Coronary heart disease and asthma or chronic obstructive pulmonary disease were the most common comorbid conditions (50% and 25%, respectively). Autopsy revealed deep venous thrombosis in 7 of 12 patients (58%) in whom venous thromboembolism was not suspected before death; pulmonary embolism was the direct cause of death in 4 patients. Postmortem computed tomography revealed reticular infiltration of the lungs with severe bilateral, dense consolidation, whereas histomorphologically diffuse alveolar damage was seen in 8 patients. In all patients, SARS–CoV-2 RNA was detected in the lung at high concentrations; viremia in 6 of 10 and 5 of 12 patients demonstrated high viral RNA titers in the liver, kidney, or heart. Limitation: Limited sample size. Conclusion: The high incidence of thromboembolic events suggests an important role of COVID-19–induced coagulopathy. Further studies are needed to investigate the molecular mechanism and overall clinical incidence of COVID-19–related death, as well as possible therapeutic interventions to reduce it. Primary Funding Source: University Medical Center Hamburg-Eppendorf.

Open Access. This article is licensed under a Creative Commons Attribution 4.0 International License, which permits use, sharing, adaptation, distribution and reproduction in any medium or format, as long as you give appropriate credit to the original author(s) and the source, provide a link to the Creative Commons licence, and indicate if changes were made. The images or other third party material in this article are included in the article’s Creative Commons licence, unless indicated otherwise in a credit line to the material. If material is not included in the article’s Creative Commons licence and your intended use is not permitted by statutory regulation or exceeds the permitted use, you will need to obtain permission directly from the copyright holder. To view a copy of this licence, visit http://creativecommons.org/licenses/by/4.0/.