The Dark Side of Fibroblasts: Cancer-Associated Fibroblasts as Mediators of Immunosuppression in the Tumor Microenvironment 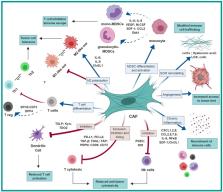 Cancer-associated fibroblasts (CAFs) are prominent components of the microenvironment in most types of solid tumors, and were shown to facilitate cancer progression by supporting tumor cell growth, extracellular matrix remodeling, promoting angiogenesis, and by mediating tumor-promoting inflammation. In addition to an inflammatory microenvironment, tumors are characterized by immune evasion and an immunosuppressive milieu. In recent years, CAFs are emerging as central players in immune regulation that shapes the tumor microenvironment. CAFs contribute to immune escape of tumors via multiple mechanisms, including secretion of multiple cytokines and chemokines and reciprocal interactions that mediate the recruitment and functional differentiation of innate and adaptive immune cells. Moreover, CAFs directly abrogate the function of cytotoxic lymphocytes, thus inhibiting killing of tumor cells. In this review, we focus on recent advancements in our understanding of how CAFs drive the recruitment and functional fate of tumor-infiltrating immune cells toward an immunosuppressive microenvironment, and provide outlook on future therapeutic implications that may lead to integration of preclinical findings into the design of novel combination strategies, aimed at impairing the tumor-supportive function of CAFs.

Philip Martin,  David W. Dawson,  W-F Tseng … (2014)
The poor clinical outcome in pancreatic ductal adenocarcinoma (PDA) is attributed to intrinsic chemoresistance and a growth-permissive tumor microenvironment. Conversion of quiescent to activated pancreatic stellate cells (PSCs) drives the severe stromal reaction that characterizes PDA. Here, we reveal that the vitamin D receptor (VDR) is expressed in stroma from human pancreatic tumors and that treatment with the VDR ligand calcipotriol markedly reduced markers of inflammation and fibrosis in pancreatitis and human tumor stroma. We show that VDR acts as a master transcriptional regulator of PSCs to reprise the quiescent state, resulting in induced stromal remodeling, increased intratumoral gemcitabine, reduced tumor volume, and a 57% increase in survival compared to chemotherapy alone. This work describes a molecular strategy through which transcriptional reprogramming of tumor stroma enables chemotherapeutic response and suggests vitamin D priming as an adjunct in PDA therapy. PAPERFLICK: Copyright © 2014 Elsevier Inc. All rights reserved.

Paul J Bambrough,  Jeremy Jones,  Lukasz Magiera … (2010)
The stromal microenvironment of tumors, which is a mixture of hematopoietic and mesenchymal cells, suppresses immune control of tumor growth. A stromal cell type that was first identified in human cancers expresses fibroblast activation protein-α (FAP). We created a transgenic mouse in which FAP-expressing cells can be ablated. Depletion of FAP-expressing cells, which made up only 2% of all tumor cells in established Lewis lung carcinomas, caused rapid hypoxic necrosis of both cancer and stromal cells in immunogenic tumors by a process involving interferon-γ and tumor necrosis factor-α. Depleting FAP-expressing cells in a subcutaneous model of pancreatic ductal adenocarcinoma also permitted immunological control of growth. Therefore, FAP-expressing cells are a nonredundant, immune-suppressive component of the tumor microenvironment.

This article was submitted to Cancer Immunity and Immunotherapy, a section of the journal Frontiers in Immunology