Short-term effects of air pollution on a range of cardiovascular events in England and Wales: case-crossover analysis of the MINAP database, hospital admissions and mortality 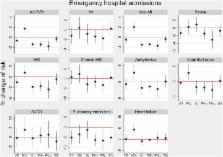 Using a time-stratified case-crossover design, over 400 000 myocardial infarction (MI) events from the Myocardial Ischaemia National Audit Project (MINAP) database, over 2 million CVD emergency hospital admissions and over 600 000 CVD deaths were linked with daily mean concentrations of carbon monoxide (CO), nitrogen dioxide (NO 2), particulate matter less than 10 μm in aerodynamic diameter (PM 10), particulate matter less than 2.5 μm in aerodynamic diameter (PM 2.5) and sulfur dioxide (SO 2), and daily maximum of 8-hourly running mean of O 3 measured at the nearest air pollution monitoring site to the place of residence. Pollutant effects were modelled using lags up to 4 days and adjusted for ambient temperature and day of week.

This study found no clear evidence for pollution effects on STEMIs and stroke, which ultimately represent thrombogenic processes, though it did for pulmonary embolism. The strongest associations with air pollution were observed with selected non-MI outcomes.

Holly Janes, Lianne Sheppard, Thomas Lumley (2005)
The case-crossover design has been widely used to study the association between short-term air pollution exposure and the risk of an acute adverse health event. The design uses cases only; for each individual case, exposure just before the event is compared with exposure at other control (or "referent") times. Time-invariant confounders are controlled by making within-subject comparisons. Even more important in the air pollution setting is that time-varying confounders can also be controlled by design by matching referents to the index time. The referent selection strategy is important for reasons in addition to control of confounding. The case-crossover design makes the implicit assumption that there is no trend in exposure across the referent times. In addition, the statistical method that is used-conditional logistic regression-is unbiased only with certain referent strategies. We review here the case-crossover literature in the air pollution context, focusing on key issues regarding referent selection. We conclude with a set of recommendations for choosing a referent strategy with air pollution exposure data. Specifically, we advocate the time-stratified approach to referent selection because it ensures unbiased conditional logistic regression estimates, avoids bias resulting from time trend in the exposure series, and can be tailored to match on specific time-varying confounders.

A. Seaton, W MacNee, K Donaldson … (1995)
Epidemiological studies have consistently shown an association between particulate air pollution and not only exacerbations of illness in people with respiratory disease but also rises in the numbers of deaths from cardiovascular and respiratory disease among older people. Meta-analyses of these studies indicate that the associations are unlikely to be explained by any confounder, and suggest that they represent cause and effect. We propose that the explanation lies in the nature of the urban particulate cloud, which may contain up to 100000 nanometer-sized particles per mL, in what may be a gravimetric concentration of only 100-200 micrograms/m3 of pollutant. We suggest that such ultra-fine particles are able to provoke alveolar inflammation, with release of mediators capable, in susceptible individuals, of causing exacerbations of lung disease and of increasing blood coagulability, thus also explaining the observed increases in cardiovascular deaths associated with urban pollution episodes. This hypothesis is testable both experimentally and epidemiologically.