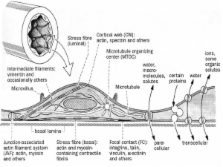 The endothelium is a thin monocelular layer that covers all the inner surface of the blood vessels, separating the circulating blood from the tissues. It is not an inactive organ, quite the opposite. It works as a receptor-efector organ and responds to each physical or chemical stimulus with the release of the correct substance with which it may maintain vasomotor balance and vascular-tissue homeostasis. It has the property of producing, independently, both agonistic and antagonistic substances that help to keep homeostasis and its function is not only autocrine, but also paracrine and endocrine. In this way it modulates the vascular smooth muscle cells producing relaxation or contraction, and therefore vasodilatation or vasoconstriction. The endothelium regulating homeostasis by controlling the production of prothrombotic and antithrombotic components, and fibrynolitics and antifibrynolitics. Also intervenes in cell proliferation and migration, in leukocyte adhesion and activation and in immunological and inflammatory processes. Cardiovascular risk factors cause oxidative stress that alters the endothelial cells capacity and leads to the so called endothelial "dysfunction" reducing its capacity to maintain homeostasis and leads to the development of pathological inflammatory processes and vascular disease.

There are different techniques to evaluate the endothelium functional capacity, that depend on the amount of NO produced and the vasodilatation effect. The percentage of vasodilatation with respect to the basal value represents the endothelial functional capacity. Taking into account that shear stress is one of the most important stimulants for the synthesis and release of NO, the non-invasive technique most often used is the transient flow-modulate "endothelium-dependent" post-ischemic vasodilatation, performed on conductance arteries such as the brachial, radial or femoral arteries. This vasodilatation is compared with the vasodilatation produced by drugs that are NO donors, such as nitroglycerine, called "endothelium independent". The vasodilatation is quantified by measuring the arterial diameter with high resolution ultrasonography. Laser-Doppler techniques are now starting to be used that also consider tissue perfusion.

There is so much proof about endothelial dysfunction that it is reasonable to believe that there is diagnostic and prognostic value in its evaluation for the late outcome. There is no doubt that endothelial dysfunction contributes to the initiation and progression of atherosclerotic disease and could be considered an independent vascular risk factor. Although prolonged randomized clinical trials are needed for unequivocal evidence, the data already obtained allows the methods of evaluation of endothelial dysfunction to be considered useful in clinical practice and have overcome the experimental step, being non-invasive increases its value making it use full for follow-up of the progression of the disease and the effects of different treatments.

Two types of murine helper T cell clone. I. Definition according to profiles of lymphokine activities and secreted proteins.

M Giedlin,  Tim R. Mosmann,  H Cherwinski … (1986)
A panel of antigen-specific mouse helper T cell clones was characterized according to patterns of lymphokine activity production, and two types of T cell were distinguished. Type 1 T helper cells (TH1) produced IL 2, interferon-gamma, GM-CSF, and IL 3 in response to antigen + presenting cells or to Con A, whereas type 2 helper T cells (TH2) produced IL 3, BSF1, and two other activities unique to the TH2 subset, a mast cell growth factor distinct from IL 3 and a T cell growth factor distinct from IL 2. Clones representing each type of T cell were characterized, and the pattern of lymphokine activities was consistent within each set. The secreted proteins induced by Con A were analyzed by biosynthetic labeling and SDS gel electrophoresis, and significant differences were seen between the two groups of T cell line. Both types of T cell grew in response to alternating cycles of antigen stimulation, followed by growth in IL 2-containing medium. Examples of both types of T cell were also specific for or restricted by the I region of the MHC, and the surface marker phenotype of the majority of both types was Ly-1+, Lyt-2-, L3T4+, Both types of helper T cell could provide help for B cells, but the nature of the help differed. TH1 cells were found among examples of T cell clones specific for chicken RBC and mouse alloantigens. TH2 cells were found among clones specific for mouse alloantigens, fowl gamma-globulin, and KLH. The relationship between these two types of T cells and previously described subsets of T helper cells is discussed.

Joseph Slupsky,  M. Gräfe,  I Anagnostopoulos … (1998)
CD40 ligand (CD40L, CD154), a transmembrane protein structurally related to the cytokine TNF-alpha, was originally identified on stimulated CD4+ T cells, and later on stimulated mast cells and basophils. Interaction of CD40L on T cells with CD40 on B cells is of paramount importance for the development and function of the humoral immune system. CD40 is not only constitutively present on B cells, but it is also found on monocytes, macrophages and endothelial cells, suggesting that CD40L has a broader function in vivo. We now report that platelets express CD40L within seconds of activation in vitro and in the process of thrombus formation in vivo. Like TNF-alpha and interleukin-1, CD40L on platelets induces endothelial cells to secrete chemokines and to express adhesion molecules, thereby generating signals for the recruitment and extravasation of leukocytes at the site of injury. Our results indicate that platelets are not only involved in haemostasis but that they also directly initiate an inflammatory response of the vessel wall.