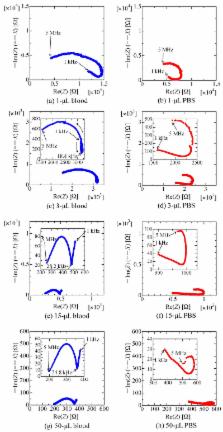 We fabricate a wearable blood leakage sensor on a cotton textile by combining two newly developed techniques. First, we employ a screen-offset printing technique that avoids blurring, short circuiting between adjacent conductive patterns, and electrode fracturing to form an interdigitated electrode structure for the sensor on a textile. Furthermore, we develop a scheme to distinguish blood from other substances by utilizing the specific dielectric dispersion of blood observed in the sub-megahertz frequency range. The sensor can detect blood volumes as low as 15 μL, which is significantly lower than those of commercially available products (which can detect approximately 1 mL of blood) and comparable to a recently reported value of approximately 10 μL. In this study, we merge two technologies to develop a more practical skin-friendly sensor that can be applied for safe, stress-free blood leakage monitoring during hemodialysis.

Cheolmin Park,  George Whitesides,  Brian J. Lee (2003)
This paper describes the compatibility of poly(dimethylsiloxane) (PDMS) with organic solvents; this compatibility is important in considering the potential of PDMS-based microfluidic devices in a number of applications, including that of microreactors for organic reactions. We considered three aspects of compatibility: the swelling of PDMS in a solvent, the partitioning of solutes between a solvent and PDMS, and the dissolution of PDMS oligomers in a solvent. Of these three parameters that determine the compatibility of PDMS with a solvent, the swelling of PDMS had the greatest influence. Experimental measurements of swelling were correlated with the solubility parameter, delta (cal(1/2) cm(-3/2)), which is based on the cohesive energy densities, c (cal/cm(3)), of the materials. Solvents that swelled PDMS the least included water, nitromethane, dimethyl sulfoxide, ethylene glycol, perfluorotributylamine, perfluorodecalin, acetonitrile, and propylene carbonate; solvents that swelled PDMS the most were diisopropylamine, triethylamine, pentane, and xylenes. Highly swelling solvents were useful for extracting contaminants from bulk PDMS and for changing the surface properties of PDMS. The feasibility of performing organic reactions in PDMS was demonstrated by performing a Diels-Alder reaction in a microchannel.

Jeff Newman,  Anthony Turner (2005)
Twenty years on from a review in the first issue of this journal, this contribution revisits glucose sensing for diabetes with an emphasis on commercial developments in the home blood glucose testing market. Following a brief introduction to the needs of people with diabetes, the review considers defining technologies that have enabled the introduction of commercial products and then reviews the products themselves. Drawing heavily on the performance of actual instruments and publicly available information from the companies themselves, this work is designed to complement more conventional reviews based on papers published in scholarly journals. It focuses on the commercial reality today and the products that we are likely to see in the near future.