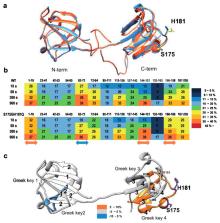 β/γ-Crystallins, the main structural protein in human lenses, have highly stable structure for keeping the lens transparent. Their mutations have been linked to cataracts. In this study, we identified 10 new mutations of β/γ-crystallins in lens proteomic dataset of cataract patients using bioinformatics tools. Of these, two double mutants, S175G/H181Q of βΒ2-crystallin and P24S/S31G of γD-crystallin, were found mutations occurred in the largest loop linking the distant β-sheets in the Greek key motif. We selected these double mutants for identifying the properties of these mutations, employing biochemical assay, the identification of protein modifications with nanoUPLC-ESI-TOF tandem MS and examining their structural dynamics with hydrogen/deuterium exchange-mass spectrometry (HDX-MS). We found that both double mutations decrease protein stability and induce the aggregation of β/γ-crystallin, possibly causing cataracts. This finding suggests that both the double mutants can serve as biomarkers of cataracts.

The Phyre2 web portal for protein modeling, prediction and analysis.

Lawrence Kelley (corresponding) ,  Stefans Mezulis,  Christopher Yates … (2015)
Phyre2 is a suite of tools available on the web to predict and analyze protein structure, function and mutations. The focus of Phyre2 is to provide biologists with a simple and intuitive interface to state-of-the-art protein bioinformatics tools. Phyre2 replaces Phyre, the original version of the server for which we previously published a paper in Nature Protocols. In this updated protocol, we describe Phyre2, which uses advanced remote homology detection methods to build 3D models, predict ligand binding sites and analyze the effect of amino acid variants (e.g., nonsynonymous SNPs (nsSNPs)) for a user's protein sequence. Users are guided through results by a simple interface at a level of detail they determine. This protocol will guide users from submitting a protein sequence to interpreting the secondary and tertiary structure of their models, their domain composition and model quality. A range of additional available tools is described to find a protein structure in a genome, to submit large number of sequences at once and to automatically run weekly searches for proteins that are difficult to model. The server is available at http://www.sbg.bio.ic.ac.uk/phyre2. A typical structure prediction will be returned between 30 min and 2 h after submission.

Alpha-crystallin can function as a molecular chaperone.

Mara J Horwitz (1992)
The alpha-crystallins (alpha A and alpha B) are major lens structural proteins of the vertebrate eye that are related to the small heat shock protein family. In addition, crystallins (especially alpha B) are found in many cells and organs outside the lens, and alpha B is overexpressed in several neurological disorders and in cell lines under stress conditions. Here I show that alpha-crystallin can function as a molecular chaperone. Stoichiometric amounts of alpha A and alpha B suppress thermally induced aggregation of various enzymes. In particular, alpha-crystallin is very efficient in suppressing the thermally induced aggregation of beta- and gamma-crystallins, the two other major mammalian structural lens proteins. alpha-Crystallin was also effective in preventing aggregation and in refolding guanidine hydrochloride-denatured gamma-crystallin, as judged by circular dichroism spectroscopy. My results thus indicate that alpha-crystallin refracts light and protects proteins from aggregation in the transparent eye lens and that in nonlens cells alpha-crystallin may have other functions in addition to its capacity to suppress aggregation of proteins.

Age-related nuclear cataract-oxidation is the key.

Roger J. W. Truscott (2005)
Age is by far the biggest risk factor for cataract, and it is sometimes assumed that cataract is simply an amplification of this aging process. This appears not to be the case, since the lens changes associated with aging and cataract are distinct. Oxidation is the hallmark of age-related nuclear (ARN) cataract. Loss of protein sulfhydryl groups, and the oxidation of methionine residues, are progressive and increase as the cataract worsens until >90% of cysteine and half the methionine residues are oxidised in the most advanced form. By contrast, there may be no significant oxidation of proteins in the centre of the lens with advancing age, even past age 80. The key factor in preventing oxidation seems to be the concentration of nuclear glutathione (GSH). Provided that nuclear GSH levels can be maintained above 2 mm, it appears that significant protein oxidation and posttranslational modification by reactive small molecules, such as ascorbate or UV filter degradation products, is not observed. Adequate coupling of the metabolically-active cortex, the source of antioxidants such as GSH, to the quiescent nucleus, is crucial especially since it would appear that the cortex remains viable in old lenses, and even possibly in ARN cataract lenses. Therefore it is vital to understand the reason for the onset of the lens barrier. This barrier, which becomes apparent in middle age, acts to impede the flow of small molecules between the cortex and the nucleus. The barrier, rather than nuclear compaction (which is not observed in human lenses), may contribute to the lowered concentration of GSH in the lens nucleus after middle age. By extending the residence time within the lens centre, the barrier also facilitates the decomposition of intrinsically unstable metabolites and may exacerbate the formation of H(2)O(2) in the nucleus. This hypothesis, which is based on the generation of reactive oxygen species and reactive molecules within the nucleus itself, shifts the focus away from theories for cataract that postulated a primary role for oxidants generated outside of the lens. Unfortunately, due to marked variability in the lenses of different species, there appears at present to be no ideal animal model system for studying human ARN cataract.