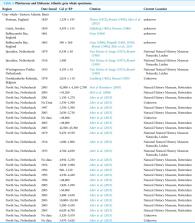 The Atlantic gray whale ( Eschrichtius robustus) presents an interesting case study of climate related dispersal and extinction. While (limited) fossil records confirm its presence in the Atlantic up until the 18th Century, its abundance and distribution within the Eastern and Western basins are still not well understood. The discovery of presumed gray whale fossil remains from the Georgia Bight and the Atlantic coast of Florida, from the mid-1980s to late-2000s, provides a new opportunity to recover additional data regarding their chronology within the Western basin. Here, we apply accelerator mass spectrometry radiocarbon techniques to six fossil whale finds, identifying dates within marine isotope stage 3 (59–24 ka) and the late Holocene, ∼2,000 yr BP. We additionally confirm the taxonomic identification of two fossil bone samples as E. robustus using collagen peptide mass fingerprinting (ZooMS). The obtained dates, when combined with a larger corpus of previously published Atlantic gray whale fossil dates, support the hypothesis for the decline of the Atlantic gray whale in the late Pleistocene and the late Holocene. These new data augment the findings of the Eastern Atlantic Basin and better incorporate the Western Atlantic Basin into a pan-ocean understanding for the species.

Morphological and molecular evidence for a stepwise evolutionary transition from teeth to baleen in mysticete whales.

Melanie A Berta,  Michael McGowen,  Thomas A Deméré … (2008)
The origin of baleen in mysticete whales represents a major transition in the phylogenetic history of Cetacea. This key specialization, a keratinous sieve that enables filter-feeding, permitted exploitation of a new ecological niche and heralded the evolution of modern baleen-bearing whales, the largest animals on Earth. To date, all formally described mysticete fossils conform to two types: toothed species from Oligocene-age rocks ( approximately 24 to 34 million years old) and toothless species that presumably utilized baleen to feed (Recent to approximately 30 million years old). Here, we show that several Oligocene toothed mysticetes have nutrient foramina and associated sulci on the lateral portions of their palates, homologous structures in extant mysticetes house vessels that nourish baleen. The simultaneous occurrence of teeth and nutrient foramina implies that both teeth and baleen were present in these early mysticetes. Phylogenetic analyses of a supermatrix that includes extinct taxa and new data for 11 nuclear genes consistently resolve relationships at the base of Mysticeti. The combined data set of 27,340 characters supports a stepwise transition from a toothed ancestor, to a mosaic intermediate with both teeth and baleen, to modern baleen whales that lack an adult dentition but retain developmental and genetic evidence of their ancestral toothed heritage. Comparative sequence data for ENAM (enamelin) and AMBN (ameloblastin) indicate that enamel-specific loci are present in Mysticeti but have degraded to pseudogenes in this group. The dramatic transformation in mysticete feeding anatomy documents an apparently rare, stepwise mode of evolution in which a composite phenotype bridged the gap between primitive and derived morphologies; a combination of fossil and molecular evidence provides a multifaceted record of this macroevolutionary pattern.

Ecological change, range fluctuations and population dynamics during the Pleistocene.

Michael Hofreiter,  John N. Stewart (2009)
Apart from the current human-induced climate change, the Holocene is notable for its stable climate. In contrast, the preceding age, the Pleistocene, was a time of intensive climatic fluctuations, with temperature changes of up to 15 degrees C occurring within a few decades. These climatic changes have substantially influenced both animal and plant populations. Until recently, the prevailing opinion about the effect of these climatic fluctuations on species in Europe was that populations survived glacial maxima in southern refugia and that populations died out outside these refugia. However, some of the latest studies of modern population genetics, the fossil record and especially ancient DNA reveal a more complex picture. There is now strong evidence for additional local northern refugia for a large number of species, including both plants and animals. Furthermore, population genetic analyses using ancient DNA have shown that genetic diversity and its geographical structure changed more often and in more unpredictable ways during the Pleistocene than had been inferred. Taken together, the Pleistocene is now seen as an extremely dynamic era, with rapid and large climatic fluctuations and correspondingly variable ecology. These changes were accompanied by similarly fast and sometimes dramatic changes in population size and extensive gene flow mediated by population movements. Thus, the Pleistocene is an excellent model case for the effects of rapid climate change, as we experience at the moment, on the ecology of plants and animals.

Funded by: Molecular identification was provided through
Award ID: ORCA FP7-PEOPLE-2011-IOF 299075
Funding for molecular identification was provided through ORCA FP7-PEOPLE-2011-IOF 299075. The funders had no role in study design, data collection and analysis, decision to publish, or preparation of the manuscript.