New Prospects for Research on Manipulation of Insect Vectors by Pathogens 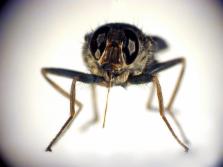 B A Urban, Stephen Ferguson, Arnab Pain … (1999)
The malaria parasite Plasmodium falciparum is one of the most successful human pathogens. Specific virulence factors remain poorly defined, although the adhesion of infected erythrocytes to the venular endothelium has been associated with some of the syndromes of severe disease. Immune responses cannot prevent the development of symptomatic infections throughout life, and clinical immunity to the disease develops only slowly during childhood. An understanding of the obstacles to the development of protective immunity is crucial for developing rational approaches to prevent the disease. Here we show that intact malaria-infected erythrocytes adhere to dendritic cells, inhibit the maturation of dendritic cells and subsequently reduce their capacity to stimulate T cells. These data demonstrate both a novel mechanism by which malaria parasites induce immune dysregulation and a functional role beyond endothelial adhesion for the adhesive phenotypes expressed at the surface of infected erythrocytes.

Manipulation of medically important insect vectors by their parasites.

Hilary Hurd (2002)
Many of the most harmful parasitic diseases are transmitted by blood-feeding insect vectors. During this stage of their life cycles, selection pressures favor parasites that can manipulate their vectors to enhance transmission. Strategies may include increasing the amount of contact between vector and host, reducing vector reproductive output and consequently altering vector resource management to increase available nutrient reserves, and increasing vector longevity. Manipulation of these life-history traits may be more beneficial at some phase of the parasite's developmental process than at others. This review examines empirical, experimental, and field-based evidence to evaluate examples of changes in vector behavior and physiology that might be construed to be manipulative. Examples are mainly drawn from malaria-infected mosquitoes, Leishmania-infected sandflies, and Trypanosoma-infected tsetse flies.

Blair Anderson, Jacob Koella, Debra L. Sorensen (1998)
It has often been suggested that vector-borne parasites alter their vector's feeding behaviour to increase their transmission, but these claims are often based on laboratory studies and lack rigorous testing in a natural situation. We show in this field study that the malaria parasite, Plasmodium falciparum, alters the blood-feeding behaviour of its mosquito vector, Anopheles gambiae s.l., in two ways. First, mosquitoes infected with sporozoited, the parasite stage that is transmitted from the mosquito to a human, took up larger blood meals than uninfected mosquitoes. Whereas 72% of the uninfected mosquitoes had obtained a full blood meal, 82% of the infected ones had engorged fully. Second, mosquitoes harbouring sporozoites were more likely to bite several people per night. Twenty-two per cent of the infected mosquitoes, but only 10% of the uninfected mosquitoes, contained blood from at least two people. We conclude that the observed changes in blood-feeding behaviour allow the parasite to spread more rapidly among human hosts, and thus confirm that the parasite manipulates the mosquito to increase its own transmission.