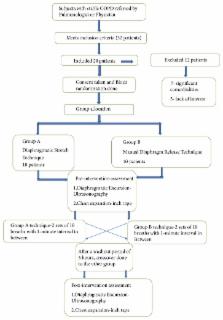 Chronic Obstructive Pulmonary Disease (COPD) impairs the function of the diaphragm by placing it at a mechanical disadvantage, shortening its operating length and changing the mechanical linkage between its various parts. This makes the diaphragm's contraction less effective in raising and expanding the lower rib cage, thereby increasing the work of breathing and reducing the functional capacity.

Aim of the Study

This randomised crossover trial included 20 clinically stable patients with mild and moderate COPD classified according to the GOLD criteria. The patients were allocated to group A or group B by block randomization done by primary investigator. The information about the technique was concealed in a sealed opaque envelope and revealed to the patients only after allocation of groups. After taking the demographic data and baseline values of the outcome measures (diaphragm mobility by ultrasonography performed by an experienced radiologist and chest expansion by inch tape performed by the therapist), group A subjects underwent the diaphragmatic stretch technique and the group B subjects underwent the manual diaphragm release technique. Both the interventions were performed in 2 sets of 10 deep breaths with 1-minute interval between the sets. The two outcome variables were recorded immediately after the intervention. A wash-out period of 3 hours was maintained to neutralize the effect of given intervention. Later the patients of group A and group B were crossed over to the other group.

Responding to the threat of chronic diseases in India.

Bela Shah,  K M Srinath,  Cherian Varghese … (2005)
At the present stage of India's health transition, chronic diseases contribute to an estimated 53% of deaths and 44% of disability-adjusted life-years lost. Cardiovascular diseases and diabetes are highly prevalent in urban areas. Tobacco-related cancers account for a large proportion of all cancers. Tobacco consumption, in diverse smoked and smokeless forms, is common, especially among the poor and rural population segments. Hypertension and dyslipidaemia, although common, are inadequately detected and treated. Demographic and socioeconomic factors are hastening the health transition, with sharp escalation of chronic disease burdens expected over the next 20 years. A national cancer control programme, initiated in 1975, has established 13 registries and increased the capacity for treatment. A comprehensive law for tobacco control was enacted in 2003. An integrated national programme for the prevention and control of cardiovascular diseases and diabetes is under development. There is a need to increase resource allocation, coordinate multisectoral policy interventions, and enhance the engagement of the health system in activities related to chronic disease prevention and control.

David M G Halpin,  M López Varela,  Masaharu Nishimura … (2017)
This Executive Summary of the Global Strategy for the Diagnosis, Management and Prevention of COPD, Global Initiative for Chronic Obstructive Lung Disease (GOLD) 2017 Report focuses primarily on the revised and novel parts of the document. The most significant changes include: (i) the assessment of chronic obstructive pulmonary disease has been refined to separate the spirometric assessment from symptom evaluation. ABCD groups are now proposed to be derived exclusively from patient symptoms and their history of exacerbations; (ii) for each of the groups A to D, escalation strategies for pharmacological treatments are proposed; (iii) the concept of de-escalation of therapy is introduced in the treatment assessment scheme; (iv)non-pharmacological therapies are comprehensively presented and (v) the importance of co-morbid conditions in managing COPD is reviewed.

Contractile properties of the human diaphragm during chronic hyperinflation.