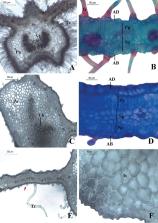 A new species of Ipomoea , endemic to the Cerrado domain in Maranhão, Brazil, is described. Ipomoea maranhensis D.Santos & Buril, sp. nov. has been misidentified as I. burchellii Meisn. in several herbaria. Even though both species have oblong, pubescent leaves, they can be distinguished by morpho-anatomical characters. We present a diagnosis, complete description, illustration, taxonomic comments, conservation status and distribution map.

Recent assembly of the Cerrado, a neotropical plant diversity hotspot, by in situ evolution of adaptations to fire.

Stephen R. Pennington,  F Simon,  Ronald de Vries … (2009)
The relative importance of local ecological and larger-scale historical processes in causing differences in species richness across the globe remains keenly debated. To gain insight into these questions, we investigated the assembly of plant diversity in the Cerrado in South America, the world's most species-rich tropical savanna. Time-calibrated phylogenies suggest that Cerrado lineages started to diversify less than 10 Mya, with most lineages diversifying at 4 Mya or less, coinciding with the rise to dominance of flammable C4 grasses and expansion of the savanna biome worldwide. These plant phylogenies show that Cerrado lineages are strongly associated with adaptations to fire and have sister groups in largely fire-free nearby wet forest, seasonally dry forest, subtropical grassland, or wetland vegetation. These findings imply that the Cerrado formed in situ via recent and frequent adaptive shifts to resist fire, rather than via dispersal of lineages already adapted to fire. The location of the Cerrado surrounded by a diverse array of species-rich biomes, and the apparently modest adaptive barrier posed by fire, are likely to have contributed to its striking species richness. These findings add to growing evidence that the origins and historical assembly of species-rich biomes have been idiosyncratic, driven in large part by unique features of regional- and continental-scale geohistory and that different historical processes can lead to similar levels of modern species richness.

ANATOMY OF THE INFERIOR OVARY OF DARBYA