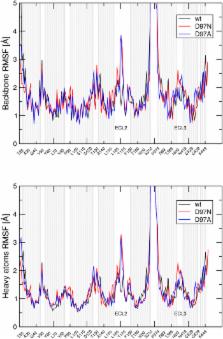 Elmar Krieger,  Günther Koraimann,  Gert Vriend (2002)
One of the conclusions drawn at the CASP4 meeting in Asilomar was that applying various force fields during refinement of template-based models tends to move predictions in the wrong direction, away from the experimentally determined coordinates. We have derived an all-atom force field aimed at protein and nucleotide optimization in vacuo (NOVA), which has been specifically designed to avoid this problem. NOVA resembles common molecular dynamics force fields but has been automatically parameterized with two major goals: (i) not to make high resolution X-ray structures worse and (ii) to improve homology models built by WHAT IF. Force-field parameters were not required to be physically correct; instead, they were optimized with random Monte Carlo moves in force-field parameter space, each one evaluated by simulated annealing runs of a 50-protein optimization set. Errors inherent to the approximate force-field equation could thus be canceled by errors in force-field parameters. Compared with the optimization set, the force field did equally well on an independent validation set and is shown to move in silico models closer to reality. It can be applied to modeling applications as well as X-ray and NMR structure refinement. A new method to assign force-field parameters based on molecular trees is also presented. A NOVA server is freely accessible at http://www.yasara.com/servers Copyright 2002 Wiley-Liss, Inc.

Activation and allosteric modulation of a muscarinic acetylcholine receptor

Andrew C. Kruse,  Aaron Ring,  Aashish Manglik … (2013)
Despite recent advances in crystallography of G protein-coupled receptors (GPCRs), little is known about the mechanism of their activation process, as only the β2 adrenergic receptor (β2AR) and rhodopsin have been crystallized in fully active conformations. Here, we report the structure of an agonist-bound, active state of the human M2 muscarinic acetylcholine receptor stabilized by a G-protein mimetic camelid antibody fragment isolated by conformational selection using yeast surface display. In addition to the expected changes in the intracellular surface, the structure reveals larger conformational changes in the extracellular region and orthosteric binding site than observed in the active states of the β2AR and rhodopsin. We also report the structure of the M2 receptor simultaneously binding the orthosteric agonist iperoxo and the positive allosteric modulator LY2119620. This structure reveals that LY2119620 recognizes a largely pre-formed binding site in the extracellular vestibule of the iperoxo-bound receptor, inducing a slight contraction of this outer binding pocket. These structures offer important insights into activation mechanism and allosteric modulation of muscarinic receptors.

Kazuko Haga,  Andrew C. Kruse,  Hidetsugu Asada … (2012)
The parasympathetic limb of the autonomic nervous system regulates the activity of multiple organ systems. Muscarinic receptors are G protein coupled receptors (GPCRs) that mediate the response to acetylcholine released from parasympathetic nerves. 1–5 Their role in the unconscious regulation of organ and central nervous system function makes them potential therapeutic targets for a broad spectrum of diseases. The M2 muscarinic acetylcholine receptor (M2 receptor) is essential for the physiologic control of cardiovascular function through activation of G protein-coupled inwardly-rectifying potassium channels, and is of particular interest because of its extensive pharmacological characterization with both orthosteric and allosteric ligands. Here we report the structure of antagonist-bound M2 receptor, the first human acetylcholine receptor to be characterized structurally. The antagonist QNB binds in the middle of a long aqueous channel extending approximately two-thirds through the membrane. The orthosteric binding pocket is formed by amino acids that are identical in all 5 muscarinic receptor subtypes, and shares structural homology with other functionally unrelated acetylcholine binding proteins from different species. A layer of tyrosine residues forms an aromatic cap restricting dissociation of the bound ligand. A binding site for allosteric ligands has been mapped to residues at the entrance to the binding pocket near this aromatic cap. The M2 receptor structure provides insights into the challenges of developing subtype-selective ligands for muscarinic receptors and their propensity for allosteric regulation.