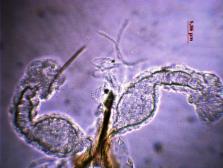 We report for the first time the presence of Phlebotomus mascittii and the female of Phlebotomus chadlii in Algeria. These two species were collected during an entomological study conducted in endemic visceral leishmaniasis focus from the north part of the country, Kabylia.

Torsten Naucke,  B Pesson (2000)
During an entomology survey in July 1999, one male and three female Phlebotomus (Transphlebotomus) mascittii were caught in southwestern Baden Württemberg. This is the first record of phlebotomine sandflies in Germany.

Fernando Franco,  Francisco Morillas-Márquez,  Sergio D Barón … (2010)
In recent years there has been growing interest in analyzing the geographical variations between populations of different Phlebotomus spp. by comparing the sequences of various genes. However, little is known about the genetic structure of Phlebotomus ariasi. In this study, we were able to sequence a fragment of the mitochondrial Cyt b gene in 133 sandflies morphologically identified as P. ariasi and proceeding from a wide geographical range covering 35 locations in 11 different regions from five countries. The intra-specific diversity of P. ariasi is high, with 45 haplotypes differing from each other by one to 26 bases and they are distributed in two mitochondrial lineages, one limited geographically to Algeria and the other widely dispersed across Mediterranean countries. The Algerian lineage is characterized by having 13 fixed polymorphisms and is made up of one sole haplotype. The European/Moroccan P. ariasi lineage is characterized by being made up of a great diversity of haplotypes (44) which display some geographical structuring. This could be one of the multiple factors involved in the epidemiological heterogeneity of the foci of leishmaniasis. Phlebotomus chadlii is the sister group of European/Moroccan P. ariasi. The separation of the Algerian haplotype, H45, from the rest of the specimens, European/Moroccan P. ariasi and P. chadlii, is well supported by the bootstrap analysis.

The sandflies of Algeria.

S Belazzoug (1991)
Twenty-two species of sandflies are known to be present in Algeria: 12 Phlebotomus and 10 Sergentomyia. Each species has its own ecological distribution except in the mountains of the central Sahara where both Mediterranean species and species of the Ethiopian zoo-geographical area occur together. Phlebotomus perniciosus and P. papatasi are the proven vectors of Leishmania infantum visceral leishmaniasis and L. major cutaneous leishmaniasis respectively.