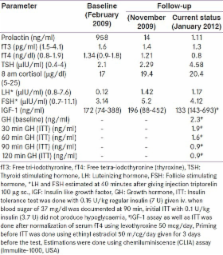 Macroprolactinoma are rare in childhood, especially in the first decade. A 9-year-old girl presented with headache, vomiting, and decreased vision for 8 months. A diagnosis of macroprolactinoma was made following documentation of elevated serum prolactin (958 ng/ml) with a contrast enhancing macroadenoma (30 × 27 × 28 mm) on magnetic resonance imaging of pituitary. Anterior pituitary function was normal. Cabergoline therapy resulted in resolution of all symptoms in 2-8 months. Revaluation at 10 months of cabergoline therapy revealed normal serum prolactin (14 ng/ml), normal pituitary function, with 91% decrease in adenoma size (11.5 × 13.6 × 12.7 mm). Evaluation at 36 months of cabergoline therapy for growth arrest and weight gain for past 6 months revealed low serum prolactin, growth hormone deficiency, and secondary hypothyroidism with empty sella. She had biochemical as well as structural resolution of prolactinoma. This report highlights the development of multiple pituitary hormone deficiency with empty sella, an uncommon side effect of cabergoline therapy for macroprolactinoma.

A comparison of cabergoline and bromocriptine in the treatment of hyperprolactinemic amenorrhea. Cabergoline Comparative Study Group.

A Mahapatra,  Surya P. Pandey,  A B OJHA (2005)
Pituitary adenomas are uncommon in childhood. This report describes the presentation, endocrinological profile, management and outcome of 42 children with pituitary adenomas. The majority of the tumors were functioning adenomas (40/42, 95.2%). Only two patients (4.8%) had non-functioning tumors. Amongst the functioning tumors, there were 20 patients (47.6%) with prolactinomas, 11 patients (26.2%) with Cushing's disease and nine patients (21.4%) with growth hormone (GH)-secreting adenomas. The most common presenting features were endocrinopathy and visual disturbances. The majority of tumors were macroadenomas, with only eight patients (all with Cushing's disease) having a microadenoma. Transsphenoidal tumor decompression was performed in most cases (71.4%). Complications following transcranial surgery were more frequent when compared to transsphenoidal surgery. There was one death following surgery. Response to radiotherapy was satisfactory. Overall, 67.6% of patients achieved endocrinological remission. Of these, 89% of the children with GH-secreting tumors and 100% of the children with Cushing's disease achieved remission. We conclude that the transsphenoidal approach is effective and safe in surgery for pituitary adenomas in children and is the procedure of choice if there is no contraindication. The combination of surgery and radiotherapy, as well as medical therapy with bromocriptine, achieves good results in the management of these uncommon tumors.

J. Smith,  Sydney M. Evans,  D. Jasper G. Rees … (2005)
Reports suggest that up to 70% of patients with microprolactinomas treated with dopamine agonist therapy may achieve long-term normoprolactinaemic remission following drug withdrawal. Yet, there is no consensus on the duration of therapy nor is therapeutic interruption universally practised. We have assessed remission rates in a large cohort of treatment-naive subjects with microprolactinomas. Subjects received dopamine agonist (DA) therapy with either cabergoline or bromocriptine for a period of 2 to 3 years in the majority of cases, followed by a trial of treatment withdrawal. Retrospective analysis of clinic records of 89 patients (mean age 32.7 +/- 8.4 years, 84 women and 5 men) who had received either cabergoline (n = 67) (0.5-3 mg weekly) or bromocriptine (n = 22) (2.5-10 mg daily) for a mean duration of 3.1 years. Following withdrawal of therapy, 57 subjects developed recurrence (64%) and the mean time to recurrence was 9.6 months (range 1-44 months), while 32 subjects (36%) remained in remission beyond 1 year (mean 3.6 years, range 1-7 years). There was no difference in remission rates between subjects treated with cabergoline (n = 21) and bromocriptine (n = 11), but a direct relationship between pretreatment prolactin concentration and risk of recurrent symptomatic hyperprolactinaemia was observed. No subjects developed clinical features to suggest tumour expansion following therapeutic discontinuation. This study confirms that abrupt withdrawal of chronic dopamine agonist therapy, following 2 to 3 years of treatment is safe and associated with long-term remission in 30-40% of subjects with microprolactinomas. This therapeutic strategy is convenient and applicable in clinical practice.