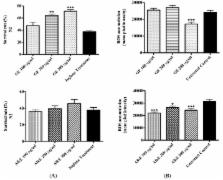 Background: Roasted seeds of Amazonian guarana ( Paullinia cupana var. sorbilis; Sapindaceae) are popular in South America due to their stimulant activity on the central nervous system (CNS). Rich in purine alkaloids, markedly caffeine, the seeds are extensively used in the Brazilian beverage industry for the preparation of soft drinks and as additives in energy drinks. Methods: To investigate the putative anti-aging and antioxidant activity of guarana, we used the model organism Caenorhabditis elegans. Chemical analyses were performed using high-performance liquid chromatography (HPLC) and electrospray ionization-mass spectrometry (ESI-MS/MS). Results: When tested in the model system Caenorhabditis elegans, the water extract from roasted guarana seeds enhanced resistance against oxidative stress, extended lifespan and attenuated aging markers such as muscle function decline and polyQ40 aggregation. Conclusions: In the current study, we demonstrate that guarana extracts can work as a powerful antioxidant in vivo; moreover, guarana extracts exhibit anti-aging properties. Our results suggest that the biological activities of guarana go beyond the extensively reported CNS stimulation.

John P. Brown,  Laura Herndon,  Monica Driscoll … (2002)
The nematode Caenorhabditis elegans is an important model for studying the genetics of ageing, with over 50 life-extension mutations known so far. However, little is known about the pathobiology of ageing in this species, limiting attempts to connect genotype with senescent phenotype. Using ultrastructural analysis and visualization of specific cell types with green fluorescent protein, we examined cell integrity in different tissues as the animal ages. We report remarkable preservation of the nervous system, even in advanced old age, in contrast to a gradual, progressive deterioration of muscle, resembling human sarcopenia. The age-1(hx546) mutation, which extends lifespan by 60-100%, delayed some, but not all, cellular biomarkers of ageing. Strikingly, we found strong evidence that stochastic as well as genetic factors are significant in C. elegans ageing, with extensive variability both among same-age animals and between cells of the same type within individuals.

Sarcopenia in the Caenorhabditis elegans pharynx correlates with muscle contraction rate over lifespan.

Emma L. Johnston,  K. Martin Chow,  Catherine Wolkow … (2006)
In muscles, sarcopenia, the loss of muscle mass, is the major cause of aging-related functional decline and frailty. Several factors are correlated with sarcopenia during aging, including contraction-related cellular injury, oxidative stress, endocrine changes and reduced regenerative potential. However the involvement of these factors has not been experimentally investigated. Here, we report that contraction-related injury may significantly promote the progression of sarcopenia in the pharynx of the nematode, Caenorhabditis elegans, a model of aging in non-regenerative tissues. Both functional and structural declines in the pharynx during aging were significantly delayed in mutants with reduced muscle contraction rates. We also examined the role of bacteria in pharynx muscle decline during aging, as previous studies reported that antimicrobial treatments could extend C. elegans lifespan. Although microbial infection may have enhanced functional decline in the pharynx during aging, it was not the sole cause of decreased pumping rates in old animals. This study identifies contraction-related injury as a factor affecting the initiation and progression of sarcopenia during aging. Further, characterization of the specific types of damage induced by muscle contraction will be helpful for understanding the underlying causes of sarcopenia.

Kylie Hesp,  Geert Smant,  Jan E Kammenga (2015)
The insulin/IGF-1 signaling pathway is evolutionarily conserved and its function is mediated largely by FOXO transcription factors. Reduced insulin/IGF-1 signaling leads to translocation of FOXO proteins from the cytoplasm to the nucleus where they activate a set of genes that mediate oxidative stress, heat shock, and xenobiotic responses, innate immunity, metabolism, and autophagy. Disruptions in the insulin/IGF-1 signaling pathway affect lifespan in many species. Over the past two decades, the function of these FOXO proteins in age-related diseases has been extensively studied, in the model organism Caenorhabditis elegans as well as in humans. In this review we investigate the mechanisms by which FOXO proteins influence the development of age-related disease pathways in both species.