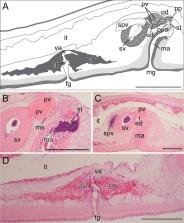 We describe a new species of polyclad flatworm, Enchiridium daidai sp. nov., from the rocky subtidal zone in the East China Sea along the coasts of the Kyushu and Okinawa Islands, Japan. Enchiridium daidai sp. nov. is characterized by i) the entire periphery of the dorsal surface narrowly fringed with orange, ii) a marginal-eyespot band extending to the position of the mouth (about anterior one-eighth of body), and iii) two prostatic vesicles covered by a common muscle sheath, which is penetrated by the ejaculatory duct. We performed a molecular phylogenetic analysis based on 945-bp 28S rDNA sequences of 16 species of Prosthiostomidae currently available in public databases in addition to those of E. daidai sp. nov. and Prosthiostomum torquatum Tsuyuki et al., 2019. In the resulting tree, our new species was nested in a clade composed of Enchiridium species. The tree topology was in favor of a taxonomic view that Enchiridium should be defined by having i) a common muscle sheath that encloses two prostatic vesicles and ii) marginal eyespots that may or may not surround the periphery of the dorsal surface.

M. Teresa Aguado,  Cristina Grande,  Michael Gerth … (2016)
The complete mitochondrial genomes of three polycladids, the acotylean Hoploplana elisabelloi and the cotyleans Enchiridium sp. and Prosthiostomum siphunculus have been assembled with high coverage from Illumina sequencing data. The mt genomes contain 36 genes including 12 of the 13 protein-coding genes characteristic for metazoan mitochondrial genomes, two ribosomal RNA genes, and 22 transfer RNA genes. Gene annotation, gene order, genetic code, start and stop codons and codon bias have been identified. In comparison with the well investigated parasitic Neodermata, our analysis reveals a great diversity of gene orders within Polycladida and Platyhelminthes in general. By analyzing representative genomes of the main groups of Platyhelminthes we explored the phylogenetic relationships of this group. The phylogenetic analyses strongly supported the monophyly of Polycladida, and based on a small taxon sampling suggest the monophyly of Acotylea and Cotylea.