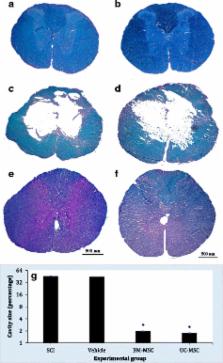 Stem cell therapy can be used for alleviating the neuropathic pain induced by spinal cord injuries (SCIs). However, survival and differentiation of stem cells following their transplantation vary depending on the host and intrinsic factors of the cell. Therefore, the present study aimed to determine the effect of stem cells derived from bone marrow (BM-MSC) and umbilical cord (UC-MSC) on neuropathic pain relief.

A compression model was used to induce SCI in a rat model. A week after SCI, about 1 million cells were transplanted into the spinal cord. Behavioral tests, including motor function recovery, mechanical allodynia, cold allodynia, mechanical hyperalgesia, and thermal hyperalgesia, were carried out every week for 8 weeks after SCI induction. A single unit recording and histological evaluation were then performed.

We show that BM-MSC and UC-MSC transplantations led to improving functional recovery, allodynia, and hyperalgesia. No difference was seen between the two cell groups regarding motor recovery and alleviating the allodynia and hyperalgesia. These cells survived in the tissue at least 8 weeks and prevented cavity formation due to SCI. However, survival rate of UC-MSC was significantly higher than BM-MSC. Electrophysiological evaluations showed that transplantation of UC-MSC brings about better results than BM-MSCs in wind up of wide dynamic range neurons.

The results of the present study show that BM-MSC and UC-MSC transplantations alleviated the symptoms of neuropathic pain and resulted in subsequent motor recovery after SCI. However, survival rate and electrophysiological findings of UC-MSC were significantly better than BM-MSC.

Karen Bieback,  Johannes Kern,  Hermann Eichler … (2006)
Mesenchymal stem cells (MSCs) represent a promising tool for new clinical concepts in supporting cellular therapy. Bone marrow (BM) was the first source reported to contain MSCs. However, for clinical use, BM may be detrimental due to the highly invasive donation procedure and the decline in MSC number and differentiation potential with increasing age. More recently, umbilical cord blood (UCB), attainable by a less invasive method, was introduced as an alternative source for MSCs. Another promising source is adipose tissue (AT). We compared MSCs derived from these sources regarding morphology, the success rate of isolating MSCs, colony frequency, expansion potential, multiple differentiation capacity, and immune phenotype. No significant differences concerning the morphology and immune phenotype of the MSCs derived from these sources were obvious. Differences could be observed concerning the success rate of isolating MSCs, which was 100% for BM and AT, but only 63% for UCB. The colony frequency was lowest in UCB, whereas it was highest in AT. However, UCB-MSCs could be cultured longest and showed the highest proliferation capacity, whereas BM-MSCs possessed the shortest culture period and the lowest proliferation capacity. Most strikingly, UCB-MSCs showed no adipogenic differentiation capacity, in contrast to BM- and AT-MSCs. Both UCB and AT are attractive alternatives to BM in isolating MSC: AT as it contains MSCs at the highest frequency and UCB as it seems to be expandable to higher numbers.

A sensitive and reliable locomotor rating scale for open field testing in rats.

D. Michele Basso,  MICHAEL BEATTIE,  JACQUELINE BRESNAHAN (1995)
Behavioral assessment after spinal cord contusion has long focused on open field locomotion using modifications of a rating scale developed by Tarlov and Klinger (1954). However, on-going modifications by several groups have made interlaboratory comparison of locomotor outcome measures difficult. The purpose of the present study was to develop an efficient, expanded, and unambiguous locomotor rating scale to standardize locomotor outcome measures across laboratories. Adult rats (n = 85) were contused at T7-9 cord level with an electromagnetic or weight drop device. Locomotor behavior was evaluated before injury, on the first or second postoperative day, and then for up to 10 weeks. Scoring categories and attributes were identified, operationally defined, and ranked based on the observed sequence of locomotor recovery patterns. These categories formed the Basso, Beattie, Bresnahan (BBB) Locomotor Rating Scale. The data indicate that the BBB scale is a valid and predictive measure of locomotor recovery able to distinguish behavioral outcomes due to different injuries and to predict anatomical alterations at the lesion center. Interrater reliability tests indicate that examiners with widely varying behavioral testing experience can apply the scale consistently and obtain similar scores. The BBB Locomotor Rating Scale offers investigators a more discriminating measure of behavioral outcome to evaluate treatments after spinal cord injury.