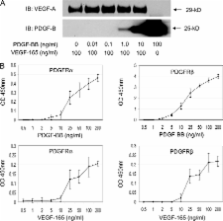 J Holash,  G Yancopoulos,  S. Davis … (2000)
A recent explosion in newly discovered vascular growth factors has coincided with exploitation of powerful new genetic approaches for studying vascular development. An emerging rule is that all of these factors must be used in perfect harmony to form functional vessels. These new findings also demand re-evaluation of therapeutic efforts aimed at regulating blood vessel growth in ischaemia, cancer and other pathological settings.

Leon Avery,  C R Blocher,  Elizabeth Smith … (1995)
Neovascular diseases of the retina are a major cause of blindness worldwide. Hypoxia is thought to be a common precursor to neovascularization in many retinal diseases, but the factors involved in the hypoxic neovascular response have not been fully identified. To investigate the role of vascular endothelial growth factor/vascular permeability factor (VEGF/VPF) in retinal neovascularization, the expression of VEGF/VPF mRNA and protein were studied in a mouse model of proliferative retinopathy. RNA (Northern) blot analysis revealed that retinal VEGF/VPF mRNA expression increased 3-fold between 6 and 12 hr of relative retinal hypoxia and remained elevated during the development of neovascularization. In situ hybridization localized VEGF/VPF mRNA to cells bodies in the inner nuclear layer of the retina. Immunohistochemical confocal microscopy demonstrated that VEGF/VPF protein levels increase with a time course similar to that of the mRNA. The cells in the inner nuclear layer of the retina that produce VEGF/VPF were identified morphologically as Müller cells. These data suggest that VEGF/VPF expression in the retina plays a central role in the development of retinal ischemia-induced ocular neovascularization.

A plasticity window for blood vessel remodelling is defined by pericyte coverage of the preformed endothelial network and is regulated by PDGF-B and VEGF.

E Keshet,  Heather Benjamin,  I Hemo (1998)
Little is known about how the initial endothelial plexus is remodelled into a mature and functioning vascular network. Studying postnatal remodelling of the retina vasculature, we show that a critical step in vascular maturation, namely pericyte recruitment, proceeds by outmigration of cells positive for (alpha)-smooth muscle actin from arterioles and that coverage of primary and smaller branches lags many days behind formation of the endothelial plexus. The transient existence of a pericyte-free endothelial plexus coincides temporally and spatially with the process of hyperoxia-induced vascular pruning, which is a mechanism for fine tuning of vascular density according to available oxygen. Acquisition of a pericyte coating marks the end of this plasticity window. To substantiate that association with pericytes stabilizes the vasculature, endothelial-pericyte associations were disrupted by intraocular injection of PDGF-BB. Ectopic PDGF-BB caused the detachment of PDGF-beta receptor-positive pericytes from newly coated vessels, presumably through interference with endogenous cues, but had no effect on mature vessels. Disruption of endothelial-pericyte associations resulted in excessive regression of vascular loops and abnormal remodelling. Conversely, intraocular injection of VEGF accelerated pericyte coverage of the preformed endothelial plexus, thereby revealing a novel function of this pleiotropic angiogenic growth factor. These findings also provide a cellular basis for clinical observations that vascular regression in premature neonates subjected to oxygen therapy [i.e. in retinopathy of prematurity] drops precipitously upon maturation of retina vessels and a mechanistic explanation to our previous findings that VEGF can rescue immature vessels from hyperoxia-induced regression.