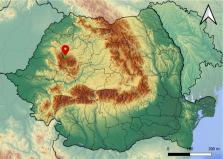 Bat flies are haematophagous ectoparasites, highly specialised to bats and are also considered to have vectorial potential for several pathogens like Bartonella spp. or Polychromophilus spp. In Romania, past studies mostly focused on the ectoparasitic fauna of cave-dwelling bats, listing the occurrence of 10 bat fly species in the country, with only scarce information on bat flies infesting crevice-roosting bat species. Here we report the occurrence of Basilia italica , a rare nycteribiid species infesting primarily forest-dwelling bats. This is the first country-record for Romania and also represents the easternmost occurrence of this species. Further studies are needed to evaluate the vectorial potential of B. italica .

Disease in the dark: molecular characterization of Polychromophilus murinus in temperate zone bats revealed a worldwide distribution of this malaria-like disease.

A Megali,  G Yannic,  P Christe (2011)
For a better understanding of the complex coevolutionary processes between hosts and parasites, accurate identification of the actors involved in the interaction is of fundamental importance. Blood parasites of the Order Haemosporidia, responsible for malaria, have become the focus of a broad range of studies in evolutionary biology. Interestingly, molecular-based studies on avian malaria have revealed much higher species diversity than previously inferred with morphology. Meanwhile, studies on bat haemosporidian have been largely neglected. In Europe, only one genus (Polychromophilus) and two species have been morphologically described. To evaluate the presence of potential cryptic species and parasite prevalence, we undertook a molecular characterization of Polychromophilus in temperate zone bats. We used a nested-PCR approach on the cytochrome b mitochondrial gene to detect the presence of parasites in 237 bats belonging to four different species and in the dipteran bat fly Nycteribia kolenatii, previously described as being the vector of Polychromophilus. Polychromophilus murinus was found in the four bat species and in the insect vector with prevalence ranging from 4% for Myotis myotis to 51% for M. daubentoni. By sequencing 682 bp, we then investigated the phylogenetic relationships of Polychromophilus to other published malarial lineages. Seven haplotypes were found, all very closely related, suggesting the presence of a single species in our samples. These haplotypes formed a well-defined clade together with Haemosporidia of tropical bats, revealing a worldwide distribution of this parasite mostly neglected by malarial studies since the 1980s. © 2010 Blackwell Publishing Ltd.