Echolocating Bats Cry Out Loud to Detect Their Prey 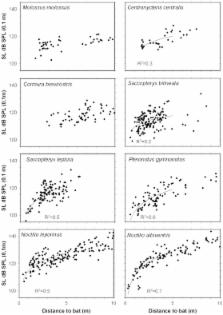 Echolocating bats have successfully exploited a broad range of habitats and prey. Much research has demonstrated how time-frequency structure of echolocation calls of different species is adapted to acoustic constraints of habitats and foraging behaviors. However, the intensity of bat calls has been largely neglected although intensity is a key factor determining echolocation range and interactions with other bats and prey. Differences in detection range, in turn, are thought to constitute a mechanism promoting resource partitioning among bats, which might be particularly important for the species-rich bat assemblages in the tropics. Here we present data on emitted intensities for 11 species from 5 families of insectivorous bats from Panamá hunting in open or background cluttered space or over water. We recorded all bats in their natural habitat in the field using a multi-microphone array coupled with photographic methods to assess the bats' position in space to estimate emitted call intensities. All species emitted intense search signals. Output intensity was reduced when closing in on background by 4–7 dB per halving of distance. Source levels of open space and edge space foragers (Emballonuridae, Mormoopidae, Molossidae, and Vespertilionidae) ranged between 122–134 dB SPL. The two Noctilionidae species hunting over water emitted the loudest signals recorded so far for any bat with average source levels of ca. 137 dB SPL and maximum levels above 140 dB SPL. In spite of this ten-fold variation in emitted intensity, estimates indicated, surprisingly, that detection distances for prey varied far less; bats emitting the highest intensities also emitted the highest frequencies, which are severely attenuated in air. Thus, our results suggest that bats within a local assemblage compensate for frequency dependent attenuation by adjusting the emitted intensity to achieve comparable detection distances for prey across species. We conclude that for bats with similar hunting habits, prey detection range represents a unifying constraint on the emitted intensity largely independent of call shape, body size, and close phylogenetic relationships.

The evolution of echolocation in bats.

Emma C Teeling,  Gareth Jones (2006)
Recent molecular phylogenies have changed our perspective on the evolution of echolocation in bats. These phylogenies suggest that certain bats with sophisticated echolocation (e.g. horseshoe bats) share a common ancestry with non-echolocating bats (e.g. Old World fruit bats). One interpretation of these trees presumes that laryngeal echolocation (calls produced in the larynx) probably evolved in the ancestor of all extant bats. Echolocation might have subsequently been lost in Old World fruit bats, only to evolve secondarily (by tongue clicking) in this family. Remarkable acoustic features such as Doppler shift compensation, whispering echolocation and nasal emission of sound each show multiple convergent origins in bats. The extensive adaptive radiation in echolocation call design is shaped largely by ecology, showing how perceptual challenges imposed by the environment can often override phylogenetic constraints.

Primitive Early Eocene bat from Wyoming and the evolution of flight and echolocation.

B. Simmons,  Gregg F. Gunnell,  Nancy B. Simmons … (2008)
Bats (Chiroptera) represent one of the largest and most diverse radiations of mammals, accounting for one-fifth of extant species. Although recent studies unambiguously support bat monophyly and consensus is rapidly emerging about evolutionary relationships among extant lineages, the fossil record of bats extends over 50 million years, and early evolution of the group remains poorly understood. Here we describe a new bat from the Early Eocene Green River Formation of Wyoming, USA, with features that are more primitive than seen in any previously known bat. The evolutionary pathways that led to flapping flight and echolocation in bats have been in dispute, and until now fossils have been of limited use in documenting transitions involved in this marked change in lifestyle. Phylogenetically informed comparisons of the new taxon with other bats and non-flying mammals reveal that critical morphological and functional changes evolved incrementally. Forelimb anatomy indicates that the new bat was capable of powered flight like other Eocene bats, but ear morphology suggests that it lacked their echolocation abilities, supporting a 'flight first' hypothesis for chiropteran evolution. The shape of the wings suggests that an undulating gliding-fluttering flight style may be primitive for bats, and the presence of a long calcar indicates that a broad tail membrane evolved early in Chiroptera, probably functioning as an additional airfoil rather than as a prey-capture device. Limb proportions and retention of claws on all digits indicate that the new bat may have been an agile climber that employed quadrupedal locomotion and under-branch hanging behaviour.

Publisher ID: 07-PONE-RA-02816R2
DOI: 10.1371/journal.pone.0002036
PMC ID: 2323577
PubMed ID: 18446226
Copyright statement: Surlykke, Kalko. This is an open-access article distributed under the terms of the Creative Commons Attribution License, which permits unrestricted use, distribution, and reproduction in any medium, provided the original author and source are credited.