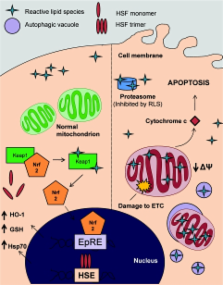 The process of lipid peroxidation is widespread in biology and is mediated through both enzymatic and non-enzymatic pathways. A significant proportion of the oxidized lipid products are electrophilic in nature, the RLS (reactive lipid species), and react with cellular nucleophiles such as the amino acids cysteine, lysine and histidine. Cell signalling by electrophiles appears to be limited to the modification of cysteine residues in proteins, whereas non-specific toxic effects involve modification of other nucleophiles. RLS have been found to participate in several physiological pathways including resolution of inflammation, cell death and induction of cellular antioxidants through the modification of specific signalling proteins. The covalent modification of proteins endows some unique features to this signalling mechanism which we have termed the ‘covalent advantage’. For example, covalent modification of signalling proteins allows for the accumulation of a signal over time. The activation of cell signalling pathways by electrophiles is hierarchical and depends on a complex interaction of factors such as the intrinsic chemical reactivity of the electrophile, the intracellular domain to which it is exposed and steric factors. This introduces the concept of electrophilic signalling domains in which the production of the lipid electrophile is in close proximity to the thiol-containing signalling protein. In addition, we propose that the role of glutathione and associated enzymes is to insulate the signalling domain from uncontrolled electrophilic stress. The persistence of the signal is in turn regulated by the proteasomal pathway which may itself be subject to redox regulation by RLS. Cell death mediated by RLS is associated with bioenergetic dysfunction, and the damaged proteins are probably removed by the lysosome-autophagy pathway.

Structure, function and evolution of glutathione transferases: implications for classification of non-mammalian members of an ancient enzyme superfamily.

D Sheehan, G. Meade, V Foley … (2001)
The glutathione transferases (GSTs; also known as glutathione S-transferases) are major phase II detoxification enzymes found mainly in the cytosol. In addition to their role in catalysing the conjugation of electrophilic substrates to glutathione (GSH), these enzymes also carry out a range of other functions. They have peroxidase and isomerase activities, they can inhibit the Jun N-terminal kinase (thus protecting cells against H(2)O(2)-induced cell death), and they are able to bind non-catalytically a wide range of endogenous and exogenous ligands. Cytosolic GSTs of mammals have been particularly well characterized, and were originally classified into Alpha, Mu, Pi and Theta classes on the basis of a combination of criteria such as substrate/inhibitor specificity, primary and tertiary structure similarities and immunological identity. Non-mammalian GSTs have been much less well characterized, but have provided a disproportionately large number of three-dimensional structures, thus extending our structure-function knowledge of the superfamily as a whole. Moreover, several novel classes identified in non-mammalian species have been subsequently identified in mammals, sometimes carrying out functions not previously associated with GSTs. These studies have revealed that the GSTs comprise a widespread and highly versatile superfamily which show similarities to non-GST stress-related proteins. Independent classification systems have arisen for groups of organisms such as plants and insects. This review surveys the classification of GSTs in non-mammalian sources, such as bacteria, fungi, plants, insects and helminths, and attempts to relate them to the more mainstream classification system for mammalian enzymes. The implications of this classification with regard to the evolution of GSTs are discussed.

The antioxidant defense system Keap1-Nrf2 comprises a multiple sensing mechanism for responding to a wide range of chemical compounds.

Makoto Kobayashi, Li Li, Noriko Iwamoto … (2009)
Animals have evolved defense systems for surviving in a chemically diverse environment. Such systems should demonstrate plasticity, such as adaptive immunity, enabling a response to even unknown chemicals. The antioxidant transcription factor Nrf2 is activated in response to various electrophiles and induces cytoprotective enzymes that detoxify them. We report here the discovery of a multiple sensing mechanism for Nrf2 activation using zebrafish and 11 Nrf2-activating compounds. First, we showed that six of the compounds tested specifically target Cys-151 in Keap1, the ubiquitin ligase for Nrf2, while two compounds target Cys-273. Second, in addition to Nrf2 and Keap1, a third factor was deemed necessary for responding to three of the compounds. Finally, we isolated a zebrafish mutant defective in its response to seven compounds but not in response to the remaining four. These results led us to categorize Nrf2 activators into six classes and hypothesize that multiple sensing allows enhanced plasticity in the system.

N A Porter, S E Caldwell, K Mills (1995)
The primary products formed from the autoxidation of lipids can be understood based upon a mechanism that involves five different reaction types. These reactions are: reaction of a carbon radical and molecular oxygen, atom transfer of a hydrogen from substrate to the chain carrying peroxyl, fragmentation of the chain carrying peroxyl to give oxygen and a carbon radical, rearrangement of the peroxyl, and cyclization of the peroxyl. The mechanism of these primary reaction steps has been the focus of extensive research over the past fifty years, and the current level of understanding of these transformations is the subject of this review.

2To whom correspondence should be addressed (email Darley@ 123456uab.edu ).

This is an open-access article distributed under the terms of the Creative Commons Attribution License, which permits unrestricted non-commercial use, distribution, and reproduction in any medium, provided the original work is properly cited.