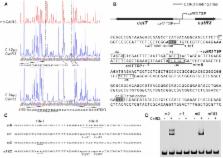 Calcimycin is a unique ionophoric antibiotic that is widely used in biochemical and pharmaceutical applications, but the genetic basis underlying the regulatory mechanisms of calcimycin biosynthesis are unclear. Here, we identified the calR3 gene, which encodes a novel TetR family transcriptional regulator and exerts a negative effect on calcimycin biosynthesis. Disruption of calR3 in Streptomyces chartreusis NRRL 3882 led to significantly increased calcimycin and its intermediate cezomycin. Gene expression analysis showed that the transcription of calR3 and its adjacent calT gene were dramatically enhanced (30- and 171-fold, respectively) in GLX26 (Δ calR3) mutants compared with the wild-type strains. Two CalR3-binding sites within the bidirectional calR3-calT promoter region were identified using a DNase I footprinting assay, indicating that CalR3 directly repressed the transcription of its own gene and the calT gene. In vitro electrophoretic mobility shift assays suggested that both calcimycin and cezomycin can act as CalR3 ligands to induce CalR3 to dissociate from its binding sites. These findings indicate negative feedback for the regulation of CalR3 in calcimycin biosynthesis and suggest that calcimycin production can be improved by manipulating its biosynthetic machinery.

Identification of the DNA bases of a DNase I footprint by the use of dye primer sequencing on an automated capillary DNA analysis instrument.

K Tessanne,  Massimo Merighi,  Michael Zianni … (2006)
We have adapted the techniques of DNA footprint analysis to an Applied Biosystems 3730 DNA Analyzer. The use of fluorescently labeled primers eliminates the need for radioactively labeled nucleotides, as well as slab gel electrophoresis, and takes advantage of commonly available automated fluorescent capillary electrophoresis instruments. With fluorescently labeled primers and dideoxynucleotide DNA sequencing, we have shown that the terminal base of each digested fragment may be accurately identified with a capillary-based instrument. Polymerase chain reaction (PCR) was performed with a 6FAM-labeled primer to amplify a typical target promoter region. This PCR product was then incubated with a transcriptional activator protein, or bovine serum albumin as a control, and then partially digested with DNase I. A clone of the promoter was sequenced with the Thermo Sequenase Dye Primer Manual Cycle Sequencing kit (USB) and the FAM-labeled primer. Through the use of Genemapper software, the Thermo sequenase and DNasei digestion products were accurately aligned, providing a ready means to assign correct nucleotides to each peak from the DNA footprint. This method was used to characterize the binding of two different transcriptional activator proteins to their respective promoter regions.

Kapil Tahlan,  Sang Kyun Ahn,  Anson Sing … (2007)
Many microorganisms produce molecules having antibiotic activity and expel them into the environment, presumably enhancing their ability to compete with their neighbours. Given that these molecules are often toxic to the producer, mechanisms must exist to ensure that the assembly of the export apparatus accompanies or precedes biosynthesis. Streptomyces coelicolor produces the polyketide antibiotic actinorhodin in a multistep pathway involving enzymes encoded by genes that are clustered together. Embedded within the cluster are genes for actinorhodin export, two of which, actR and actA resemble the classic tetR and tetA repressor/efflux pump-encoding gene pairs that confer resistance to tetracycline. Like TetR, which represses tetA, ActR is a repressor of actA. We have identified several molecules that can relieve repression by ActR. Importantly (S)-DNPA (an intermediate in the actinorhodin biosynthetic pathway) and kalafungin (a molecule related to the intermediate dihydrokalafungin), are especially potent ActR ligands. This suggests that along with the mature antibiotic(s), intermediates in the biosynthetic pathway might activate expression of the export genes thereby coupling export to biosynthesis. We suggest that this could be a common feature in the production of many bioactive natural products.