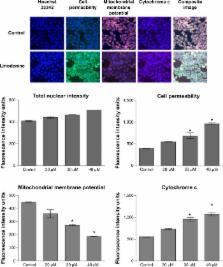 Enicosanthellum pulchrum is a tropical plant from Malaysia and belongs to the Annonaceae family. This plant is rich in isoquinoline alkaloids. In the present study, liriodenine, an isoquinoline alkaloid, was examined as a potential anticancer agent, particularly in ovarian cancer. Liriodenine was isolated by preparative high-performance liquid chromatography. Cell viability was performed to determine the cytotoxicity, whilst the detection of morphological changes was carried out by acridine orange/propidium iodide assay. Initial and late apoptosis was examined by Annexin V-fluorescein isothiocyanate and DNA laddering assays, respectively. The involvement of pathways was detected via caspase-3, caspase-8, and caspase-9 analyses. Confirmation of pathways was further performed in mitochondria using a cytotoxicity 3 assay. Apoptosis was confirmed at the protein level, including Bax, Bcl-2, and survivin, while interruption of the cell cycle was used for final validation of apoptosis. The result showed that liriodenine inhibits proliferation of CAOV-3 cells at 37.3 μM after 24 hours of exposure. Changes in cell morphology were detected by the presence of cell membrane blebbing, chromatin condensation, and formation of apoptotic bodies. Early apoptosis was observed by Annexin V-fluorescein isothiocyanate bound to the cell membrane as early as 24 hours. Liriodenine activated the intrinsic pathway by induction of caspase-3 and caspase-9. Involvement of the intrinsic pathway in the mitochondria could be seen, with a significant increase in mitochondrial permeability and cytochrome c release, whereas the mitochondrial membrane potential was decreased. DNA fragmentation occurred at 72 hours upon exposure to liriodenine. The presence of DNA fragmentation indicates the CAOV-3 cells undergo late apoptosis or final stage of apoptosis. Confirmation of apoptosis at the protein level showed overexpression of Bax and suppression of Bcl-2 and survivin. Liriodenine inhibits progression of the CAOV-3 cell cycle in S phase. These findings indicate that liriodenine could be considered as a promising anticancer agent.

Exposure of phosphatidylserine on the surface of apoptotic lymphocytes triggers specific recognition and removal by macrophages.

Annexin V-affinity assay: a review on an apoptosis detection system based on phosphatidylserine exposure.

F Ramaekers,  B Schutte,  Thomas Nieland … (1998)
Apoptosis is a programmed, physiological mode of cell death that plays an important role in tissue homeostasis. Understanding of the basic mechanisms that underlie apoptosis will point to potentially new targets of therapeutic treatment of diseases that show an imbalance between cell proliferation and cell loss. In order to conduct such research, techniques and tools to reliably identify and enumerate death by apoptosis are essential. This review focuses on a novel technique to detect apoptosis by targeting for the loss of phospholipid asymmetry of the plasma membrane. It was recently shown that loss of plasma membrane asymmetry is an early event in apoptosis, independent of the cell type, resulting in the exposure of phosphatidylserine (PS) residues at the outer plasma membrane leaflet. Annexin V was shown to interact strongly and specifically with PS and can be used to detect apoptosis by targeting for the loss of plasma membrane asymmetry. Labeled annexin V can be applied both in flow cytometry and in light microscopy in both vital and fixed material by using appropriate protocols. The annexin V method is an extension to the current available methods. This review describes the basic mechanisms underlying the loss of membrane asymmetry during apoptosis and discusses the novel annexin V-binding assay.

Jane Savill,  V Fadok (2000)
While philosophers seek the meaning of life, cell biologists are becoming ever more interested in the meaning of death. Apoptosis marks unwanted cells with 'eat me' signals that direct recognition, engulfment and degradation by phagocytes. Far from being the end of the story, these clearance events allow scavenger cells to confer meaning upon cell death. But if the phagocytic 'spin doctors' receive or transmit the wrong messages, trouble ensues.