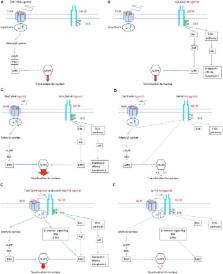 The pathogenesis of orbital Graves’ disease (GD), a process known as thyroid-associated ophthalmopathy (TAO), remains incompletely understood. The thyrotropin receptor (TSHR) represents the central autoantigen involved in GD and has been proposed as the thyroid antigen shared with the orbit that could explain the infiltration of immune cells into tissues surrounding the eye. Another cell surface protein, insulin-like growth factor-I receptor (IGF-IR), has recently been proposed as a second antigen that participates in TAO by virtue of its interactions with anti-IGF-IR antibodies generated in GD, its apparent physical and functional complex formation with TSHR, and its necessary involvement in TSHR post-receptor signaling. The proposal that IGF-IR is involved in TAO has provoked substantial debate. Furthermore, several studies from different laboratory groups, each using different experimental models, have yielded conflicting results. In this article, we attempt to summarize the biological characteristics of IGF-IR and TSHR. We also review the evidence supporting and refuting the postulate that IGF-IR is a self-antigen in GD and that it plays a potentially important role in TAO. The putative involvement of IGF-IR in disease pathogenesis carries substantial clinical implications. Specifically, blocking this receptor with monoclonal antibodies can dramatically attenuate the induction by TSH and pathogenic antibodies generated in GD of proinflammatory genes in cultured orbital fibroblasts and fibrocytes. These cell types appear critical to the development of TAO. These observations have led to the conduct of a now-completed multicenter therapeutic trial of a fully human monoclonal anti-IGF-IR blocking antibody in moderate to severe, active TAO.

Floriana Morgillo,  Sang Lee,  Woo Jean Kim … (2006)
Epidermal growth factor receptor (EGFR) tyrosine kinase inhibitors (TKIs) have been used to treat non-small cell lung cancer (NSCLC). However, the overall response rate to EGFR TKIs is limited, and the mechanisms mediating resistance to the drugs are poorly understood. Here, we report that insulin-like growth factor-I receptor (IGF-IR) activation interferes with the antitumor activity of erlotinib, an EGFR TKI. Treatment with erlotinib increased the levels of EGFR/IGF-IR heterodimer localized on cell membrane, activated IGF-IR and its downstream signaling mediators, and stimulated mammalian target of rapamycin (mTOR)-mediated de novo protein synthesis of EGFR and survivin in NSCLC cells. Inhibition of IGF-IR activation, suppression of mTOR-mediated protein synthesis, or knockdown of survivin expression abolished resistance to erlotinib and induced apoptosis in NSCLC cells in vitro and in vivo. Our data suggest that enhanced synthesis of survivin protein mediated by the IGFR/EGFR heterodimer counteracts the antitumor action of erlotinib, indicating the needs of integration of IGF-IR-targeted agents to the treatment regimens with EGFR TKI for patients with lung cancer.

J. Smith,  Terry Smith (2010)
This topically limited review explores the relationship between the immune system and insulin-like growth factors (IGF-I and IGF-II) and the proteins through which they act, including IGF-I receptor (IGF-IR) and the IGF-I binding proteins. The IGF/IGF-IR pathway plays important and diverse roles in tissue development and function. It regulates cell cycle progression, apoptosis, and the translation of proteins. Many of the consequences ascribed to IGF-IR activation result from its association with several accessory proteins that are either identical or closely related to those involved in insulin receptor signaling. Relatively recent awareness that IGF-I and IGF-IR regulate immune function has cast this pathway in an unexpected light; it may represent an important switch governing the quality and amplitude of immune responses. IGF-I/IGF-IR signaling may also participate in the pathogenesis of autoimmune diseases, although its relationship with these processes seems complex and relatively unexplored. On the one hand, IGF-I seems to protect experimental animals from developing insulin-deficient diabetes mellitus. In contrast, activating antibodies directed at IGF-IR have been detected in patients with Graves' disease, where the receptor is overexpressed by multiple cell types. The frequency of IGF-IR+ B and T cells is substantially increased in patients with that disease. Potential involvement of IGF-I and IGF-IR in the pathogenesis of autoimmune diseases suggests that this pathway might constitute an attractive therapeutic target. IGF-IR has been targeted in efforts directed toward drug development for cancer, employing both small-molecule and monoclonal antibody approaches. These have been generally well-tolerated. Recognizing the broader role of IGF-IR in regulating both normal and pathological immune responses may offer important opportunities for therapeutic intervention in several allied diseases that have proven particularly difficult to treat.

Evidence for an association between thyroid-stimulating hormone and insulin-like growth factor 1 receptors: a tale of two antigens implicated in Graves' disease.

Amiya P Sinha Hikim,  J Clayton,  A G Gianoukakis … (2008)
Thyroid-stimulating hormone receptor (TSHR) plays a central role in regulating thyroid function and is targeted by IgGs in Graves' disease (GD-IgG). Whether TSHR is involved in the pathogenesis of thyroid-associated ophthalmopathy (TAO), the orbital manifestation of GD, remains uncertain. TSHR signaling overlaps with that of insulin-like grow factor 1 receptor (IGF-1R). GD-IgG can activate fibroblasts derived from donors with GD to synthesize T cell chemoattractants and hyaluronan, actions mediated through IGF-1R. In this study, we compare levels of IGF-1R and TSHR on the surfaces of TAO and control orbital fibroblasts and thyrocytes and explore the physical and functional relationship between the two receptors. TSHR levels are 11-fold higher on thyrocytes than on TAO or control fibroblasts. In contrast, IGF-1R levels are 3-fold higher on TAO vs control fibroblasts. In pull-down studies using fibroblasts, thyrocytes, and thyroid tissue, Abs directed specifically against either IGF-1Rbeta or TSHR bring both proteins out of solution. Moreover, IGF-1Rbeta and TSHR colocalize to the perinuclear and cytoplasmic compartments in fibroblasts and thyrocytes by confocal microscopy. Examination of orbital tissue from patients with TAO reveals similar colocalization to cell membranes. Treatment of primary thyrocytes with recombinant human TSH results in rapid ERK phosphorylation which can be blocked by an IGF-1R-blocking mAb. Our findings suggest that IGF-1R might mediate some TSH-provoked signaling. Furthermore, they indicate that TSHR levels on orbital fibroblasts are considerably lower than those on thyrocytes and that this receptor associates with IGF-1R in situ and together may comprise a functional complex in thyroid and orbital tissue.

Specialty section: This article was submitted to Thyroid Endocrinology, a section of the journal Frontiers in Endocrinology