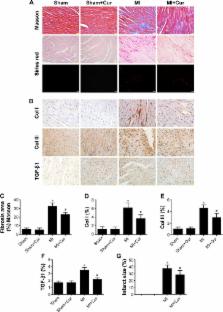 Curcumin, a polyphenolic compound derived from turmeric, protects against myocardial injury by alleviating oxidative stress, inflammation, apoptosis, and fibrosis. However, the role of curcumin and its mechanism of action on interstitial fibrosis after myocardial infarction (MI) are poorly understood. To clarify, MI was induced by a permanent ligation of the left anterior descending coronary artery in adult mice, and the effects of curcumin were evaluated 4 weeks after the MI event. In vitro, we treated cardiac fibroblasts (CFs) with Ang II, and investigated the anti-fibrotic mechanism of curcumin. Our results showed that curcumin significantly attenuated collagen deposition in vivo and inhibited CF proliferation and migration, and MMP expression. In addition, we found that the down-regulation of SIRT1 after MI was attenuated by curcumin pretreatment, which indicated that the activation of SIRT1 might be involved in the protective action of curcumin. This hypothesis was confirmed by genetic inhibition of SIRT1 (siRNA-SIRT1) in Ang II-treated CFs. Our results provide new insights into the mechanism underlying the anti-fibrotic effects of curcumin in the heart.

A novel and efficient model of coronary artery ligation and myocardial infarction in the mouse.

George W. Koch,  L. Ma,  Qian Fan … (2010)
coronary artery ligation to induce myocardial infarction (MI) in mice is typically performed by an invasive and time-consuming approach that requires ventilation and chest opening (classic method), often resulting in extensive tissue damage and high mortality. We developed a novel and rapid surgical method to induce MI that does not require ventilation. the purpose of this study was to develop and comprehensively describe this method and directly compare it to the classic method. male C57/B6 mice were grouped into 4 groups: new method MI (MI-N) or sham (S-N) and classic method MI (MI-C) or sham (S-C). In the new method, heart was manually exposed without intubation through a small incision and MI was induced. In the classic method, MI was induced through a ventilated thoracotomy. Similar groups were used in an ischemia/reperfusion injury model. This novel MI procedure is rapid, with an average procedure time of 1.22 ± 0.05 minutes, whereas the classic method requires 23.2 ± 0.6 minutes per procedure. Surgical mortality was 3% in MI-N and 15.9% in MI-C. The rate of arrhythmia was significantly lower in MI-N. The postsurgical levels of tumor necrosis factor-α and myeloperoxidase were lower in new method, indicating less inflammation. Overall, 28-day post-MI survival rate was 68% with MI-N and 48% with MI-C. Importantly, there was no difference in infarct size or post-MI cardiac function between the methods. this new rapid method of MI in mice represents a more efficient and less damaging model of myocardial ischemic injury compared with the classic method.

Peiyong Zhai,  Shouji Matsushima,  Takanobu Yamamoto … (2010)
Silent information regulator 1 (Sirt1), a class III histone deacetylase, retards aging and protects the heart from oxidative stress. We here examined whether Sirt1 is protective against myocardial ischemia/reperfusion (I/R). Protein and mRNA expression of Sirt1 is significantly reduced by I/R. Cardiac-specific Sirt1(-/-) mice exhibited a significant increase (44±5% versus 15±5%; P=0.01) in the size of myocardial infarction/area at risk. In transgenic mice with cardiac-specific overexpression of Sirt1, both myocardial infarction/area at risk (15±4% versus 36±8%; P=0.004) and terminal deoxynucleotidyl transferase dUTP nick end labeling-positive nuclei (4±3% versus 10±1%; P<0.003) were significantly reduced compared with nontransgenic mice. In Langendorff-perfused hearts, the functional recovery during reperfusion was significantly greater in transgenic mice with cardiac-specific overexpression of Sirt1 than in nontransgenic mice. Sirt1 positively regulates expression of prosurvival molecules, including manganese superoxide dismutase, thioredoxin-1, and Bcl-xL, whereas it negatively regulates the proapoptotic molecules Bax and cleaved caspase-3. The level of oxidative stress after I/R, as evaluated by anti-8-hydroxydeoxyguanosine staining, was negatively regulated by Sirt1. Sirt1 stimulates the transcriptional activity of FoxO1, which in turn plays an essential role in mediating Sirt1-induced upregulation of manganese superoxide dismutase and suppression of oxidative stress in cardiac myocytes. Sirt1 plays an important role in mediating I/R-induced increases in the nuclear localization of FoxO1 in vivo. These results suggest that Sirt1 protects the heart from I/R injury through upregulation of antioxidants and downregulation of proapoptotic molecules through activation of FoxO and decreases in oxidative stress.

P. Libby,  Morgen A R Kelly,  S Frantz … (2000)
Matrix metalloproteinase-9 (MMP-9) is prominently overexpressed after myocardial infarction (MI). We tested the hypothesis that mice with targeted deletion of MMP9 have less left ventricular (LV) dilation after experimental MI than do sibling wild-type (WT) mice. Animals that survived ligation of the left coronary artery underwent echocardiographic studies after MI; all analyses were performed without knowledge of mouse genotype. By day 8, MMP9 knockout (KO) mice had significantly smaller increases in end-diastolic and end-systolic ventricular dimensions at both midpapillary and apical levels, compared with infarcted WT mice; these differences persisted at 15 days after MI. MMP-9 KO mice had less collagen accumulation in the infarcted area than did WT mice, and they showed enhanced expression of MMP-2, MMP-13, and TIMP-1 and a reduced number of macrophages. We conclude that targeted deletion of the MMP9 gene attenuates LV dilation after experimental MI in mice. The decrease in collagen accumulation and the enhanced expression of other MMPs suggest that MMP-9 plays a prominent role in extracellular matrix remodeling after MI.