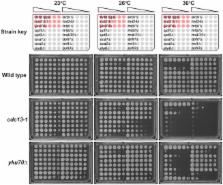 To better understand telomere biology in budding yeast, we have performed systematic suppressor/enhancer analyses on yeast strains containing a point mutation in the essential telomere capping gene CDC13 ( cdc13-1) or containing a null mutation in the DNA damage response and telomere capping gene YKU70 ( yku70Δ). We performed Quantitative Fitness Analysis (QFA) on thousands of yeast strains containing mutations affecting telomere-capping proteins in combination with a library of systematic gene deletion mutations. To perform QFA, we typically inoculate 384 separate cultures onto solid agar plates and monitor growth of each culture by photography over time. The data are fitted to a logistic population growth model; and growth parameters, such as maximum growth rate and maximum doubling potential, are deduced. QFA reveals that as many as 5% of systematic gene deletions, affecting numerous functional classes, strongly interact with telomere capping defects. We show that, while Cdc13 and Yku70 perform complementary roles in telomere capping, their genetic interaction profiles differ significantly. At least 19 different classes of functionally or physically related proteins can be identified as interacting with cdc13-1, yku70Δ, or both. Each specific genetic interaction informs the roles of individual gene products in telomere biology. One striking example is with genes of the nonsense-mediated RNA decay (NMD) pathway which, when disabled, suppress the conditional cdc13-1 mutation but enhance the null yku70Δ mutation. We show that the suppressing/enhancing role of the NMD pathway at uncapped telomeres is mediated through the levels of Stn1, an essential telomere capping protein, which interacts with Cdc13 and recruitment of telomerase to telomeres. We show that increased Stn1 levels affect growth of cells with telomere capping defects due to cdc13-1 and yku70Δ. QFA is a sensitive, high-throughput method that will also be useful to understand other aspects of microbial cell biology.

Telomeres, specialized structures at the end of linear chromosomes, ensure that chromosome ends are not mistakenly treated as DNA double-strand breaks. Defects in the telomere cap contribute to ageing and cancer. In yeast, defects in telomere capping proteins can cause telomeres to behave like double-strand breaks. To better understand the telomere and responses to capping failure, we have combined a systematic yeast gene deletion library with mutations affecting important yeast telomere capping proteins, Cdc13 or Yku70. Quantitative Fitness Analysis (QFA) was used to accurately measure the fitness of thousands of different yeast strains containing telomere capping defects and additional deletion mutations. Interestingly, we find that many gene deletions suppress one type of telomere capping defect while enhancing another. Through QFA, we can begin to define the roles of different gene products in contributing to different aspects of the telomere cap. Strikingly, mutations in nonsense-mediated mRNA decay pathways, which degrade many RNA molecules, suppress the cdc13-1 defect while enhancing the yku70Δ defect. QFA is widely applicable and will be useful for understanding other aspects of yeast cell biology.

E Blackburn,  Carol Greider (1985)
We have found a novel activity in Tetrahymena cell free extracts that adds tandem TTGGGG repeats onto synthetic telomere primers. The single-stranded DNA oligonucleotides (TTGGGG)4 and TGTGTGGGTGTGTGGGTGTGTGGG, consisting of the Tetrahymena and yeast telomeric sequences respectively, each functioned as primers for elongation, while (CCCCAA)4 and two nontelomeric sequence DNA oligomers did not. Efficient synthesis of the TTGGGG repeats depended only on addition of micromolar concentrations of oligomer primer, dGTP, and dTTP to the extract. The activity was sensitive to heat and proteinase K treatment. The repeat addition was independent of both endogenous Tetrahymena DNA and the endogenous alpha-type DNA polymerase; and a greater elongation activity was present during macronuclear development, when a large number of telomeres are formed and replicated, than during vegetative cell growth. We propose that the novel telomere terminal transferase is involved in the addition of telomeric repeats necessary for the replication of chromosome ends in eukaryotes.

Judith Recht,  Junhong Han,  Marinella Gebbia … (2007)
Defining the functional relationships between proteins is critical for understanding virtually all aspects of cell biology. Large-scale identification of protein complexes has provided one important step towards this goal; however, even knowledge of the stoichiometry, affinity and lifetime of every protein-protein interaction would not reveal the functional relationships between and within such complexes. Genetic interactions can provide functional information that is largely invisible to protein-protein interaction data sets. Here we present an epistatic miniarray profile (E-MAP) consisting of quantitative pairwise measurements of the genetic interactions between 743 Saccharomyces cerevisiae genes involved in various aspects of chromosome biology (including DNA replication/repair, chromatid segregation and transcriptional regulation). This E-MAP reveals that physical interactions fall into two well-represented classes distinguished by whether or not the individual proteins act coherently to carry out a common function. Thus, genetic interaction data make it possible to dissect functionally multi-protein complexes, including Mediator, and to organize distinct protein complexes into pathways. In one pathway defined here, we show that Rtt109 is the founding member of a novel class of histone acetyltransferases responsible for Asf1-dependent acetylation of histone H3 on lysine 56. This modification, in turn, enables a ubiquitin ligase complex containing the cullin Rtt101 to ensure genomic integrity during DNA replication.

Publisher ID: 10-PLGE-RA-4134R3
DOI: 10.1371/journal.pgen.1001362
PMC ID: 3072368
PubMed ID: 21490951
Copyright statement: Addinall et al. This is an open-access article distributed under the terms of the Creative Commons Attribution License, which permits unrestricted use, distribution, and reproduction in any medium, provided the original author and source are credited.