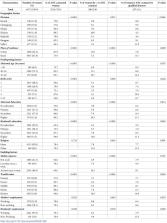 Antenatal care (ANC) contacts have long been considered a critical component of the continuum of care for a pregnant mother along with the newborn baby. The latest maternal mortality survey in Bangladesh suggests that progress in reducing maternal mortality has stalled as only 37% of pregnant women have attended at least four ANC contacts. This paper aims to determine what factors are associated with ANC contacts for women in Bangladesh. We analysed the data, provided by Bangladesh demographic and health survey 2014, covering a nationally representative sample of 17,863 ever married women aged 15–49 years. A two-stage stratified cluster sampling was used to collect the data. Data derived from 4,475 mothers who gave birth in the three years preceding the survey. Descriptive, inferential, and multivariate statistical techniques were used to analyse the data. An overall 78.4% of women had ANC contacts, but the WHO recommended ≥8 ANC contacts and ANC contacts by qualified doctors were only 8% for each. The logistic regression analysis revealed that division, maternal age, women’s education, husband’s education, wealth index and media exposure were associated with the ANC contacts. Likewise, place of residence, women’s education, religion, and wealth index were also found to be associated with the WHO recommended ANC contacts. Furthermore, the husband’s education, division, religion and husband’s employment showed significant associations with ANC contacts by qualified doctors. However, Bangladeshi women in general revealed an unsatisfactory level of ANC contacts, the WHO recommended as well as ANC contacts by qualified doctors. In order to improve the situation, it is necessary to follow the most recent ANC contacts recommended by the WHO and to contact the qualified doctors. Moreover, an improvement in education as well as access to information along with an increase of transports, care centres and reduction of service costs would see an improvement of ANC contacts in Bangladesh.

Factors associated with the use and quality of antenatal care in Nepal: a population-based study using the demographic and health survey data

Chandni Joshi,  Siranda Torvaldsen,  Ray Hodgson … (2014)
Background Good quality antenatal care (ANC) reduces maternal and neonatal mortality and improves health outcomes, particularly in low-income countries. Quality of ANC is measured by three dimensions: number of visits, timing of initiation of care and inclusion of all recommended components of care. Although some studies report on predictors of the first two indicators, no studies on the third indicator, which measures quality of ANC received, have been conducted in Nepal. Nepal follows the World Health Organization’s recommendations of initiation of ANC within the first four months of pregnancy and at least four ANC visits during the course of an uncomplicated pregnancy. This study aimed to identify factors associated with 1) attendance at four or more ANC visits and 2) receipt of good quality ANC. Methods Data from Nepal Demographic and Health Survey 2011 were analysed for 4,079 mothers. Good quality ANC was defined as that which included all seven recommended components: blood pressure measurement; urine tests for detecting bacteriuria and proteinuria; blood tests for syphilis and anaemia; and provision of iron supplementation, intestinal parasite drugs, tetanus toxoid injections and health education. Results Half the women had four or more ANC visits and 85% had at least one visit. Health education, iron supplementation, blood pressure measurement and tetanus toxoid were the more commonly received components of ANC. Older age, higher parity, and higher levels of education and household economic status of the women were predictors of both attendance at four or more visits and receipt of good quality ANC. Women who did not smoke, had a say in decision-making, whose husbands had higher levels of education and were involved in occupations other than agriculture were more likely to attend four or more visits. Other predictors of women’s receipt of good quality ANC were receiving their ANC from a skilled provider, in a hospital, living in an urban area and being exposed to general media. Conclusions Continued efforts at improving access to quality ANC in Nepal are required. In the short term, less educated women from socioeconomically disadvantaged households require targeting. Long-term improvements require a focus on improving female education.

Determinants of the use of maternal health services in rural Bangladesh.

Sandip Chakraborty,  A. Islam,  S. Chowdhury … (2003)
Utilization of health services is a complex behavioral phenomenon. Empirical studies of preventive and curative services have often found that use of health services is related to the availability, quality and cost of services, as well as to social structure, health beliefs and personal characteristics of the users. In this paper an attempt is made to examine the factors associated with the use of maternal health care services in Bangladesh on the basis of data from a survey of maternal morbidity in Bangladesh, conducted by the Bangladesh Institute of Research for Promotion of Essential and Reproductive Health and Technologies (BIRPERHT). The results from both the bivariate and multivariate analyses confirmed the importance of mother's education in explaining the utilization of health care services. Female education retains a net effect on maternal health service use, independent of other women's background characteristics, household's socioeconomic status and access to healthcare services. The strong influence of mother's education on the utilization of health care services is consistent with findings from other studies. Women whose husbands are involved in business/services also positively influenced the utilization of modern health care services. However, the study results are inconclusive with respect to the influence of other predisposing and enabling factors, such as women's age, number of previous pregnancies and access to health facilities. Multivariate logistic regression estimates do not show any significant impact of these factors on the use of maternal health care. The influence of severity of disease condition in explaining the utilization of maternal health care appears to be significant. Multivariate analysis indicate that women having had a life-threatening condition are little over two times more likely to seek care from a doctor or nurse to treat their maternal morbidities.

We did not receive any funding for this work.