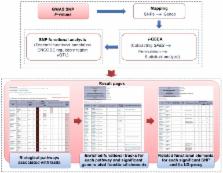 Iakes Ezkurdia (2013)
Summary The human genome encodes the blueprint of life, but the function of the vast majority of its nearly three billion bases is unknown. The Encyclopedia of DNA Elements (ENCODE) project has systematically mapped regions of transcription, transcription factor association, chromatin structure, and histone modification. These data enabled us to assign biochemical functions for 80% of the genome, in particular outside of the well-studied protein-coding regions. Many discovered candidate regulatory elements are physically associated with one another and with expressed genes, providing new insights into the mechanisms of gene regulation. The newly identified elements also show a statistical correspondence to sequence variants linked to human disease, and can thereby guide interpretation of this variation. Overall the project provides new insights into the organization and regulation of our genes and genome, and an expansive resource of functional annotations for biomedical research.

Data, information, knowledge and principle: back to metabolism in KEGG

Minoru Kanehisa,  Susumu Goto,  Yoko Sato … (2013)
In the hierarchy of data, information and knowledge, computational methods play a major role in the initial processing of data to extract information, but they alone become less effective to compile knowledge from information. The Kyoto Encyclopedia of Genes and Genomes (KEGG) resource (http://www.kegg.jp/ or http://www.genome.jp/kegg/) has been developed as a reference knowledge base to assist this latter process. In particular, the KEGG pathway maps are widely used for biological interpretation of genome sequences and other high-throughput data. The link from genomes to pathways is made through the KEGG Orthology system, a collection of manually defined ortholog groups identified by K numbers. To better automate this interpretation process the KEGG modules defined by Boolean expressions of K numbers have been expanded and improved. Once genes in a genome are annotated with K numbers, the KEGG modules can be computationally evaluated revealing metabolic capacities and other phenotypic features. The reaction modules, which represent chemical units of reactions, have been used to analyze design principles of metabolic networks and also to improve the definition of K numbers and associated annotations. For translational bioinformatics, the KEGG MEDICUS resource has been developed by integrating drug labels (package inserts) used in society.