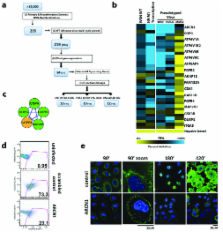 Kavitha Venkatesan,  Jean-François Rual,  Alexei Vazquez … (2009)
Several attempts have been made at systematically mapping protein-protein interaction, or “interactome” networks. However, it remains difficult to assess the quality and coverage of existing datasets. We describe a framework that uses an empirically-based approach to rigorously dissect quality parameters of currently available human interactome maps. Our results indicate that high-throughput yeast two-hybrid (HT-Y2H) interactions for human are superior in precision to literature-curated interactions supported by only a single publication, suggesting that HT-Y2H is suitable to map a significant portion of the human interactome. We estimate that the human interactome contains ~130,000 binary interactions, most of which remain to be mapped. Similar to estimates of DNA sequence data quality and genome size early in the human genome project, estimates of protein interaction data quality and interactome size are critical to establish the magnitude of the task of comprehensive human interactome mapping and to illuminate a path towards this goal.

Hameeda Sultana,  Jenna R. Montgomery,  Abraham Brass … (2008)
West Nile virus (WNV), and related flaviviruses such as tick-borne encephalitis, Japanese encephalitis, yellow fever and dengue viruses, constitute a significant global human health problem. However, our understanding of the molecular interaction of such flaviviruses with mammalian host cells is limited. WNV encodes only 10 proteins, implying that it may use many cellular proteins for infection. WNV enters the cytoplasm through pH-dependent endocytosis, undergoes cycles of translation and replication, assembles progeny virions in association with endoplasmic reticulum, and exits along the secretory pathway. RNA interference (RNAi) presents a powerful forward genetics approach to dissect virus-host cell interactions. Here we report the identification of 305 host proteins that affect WNV infection, using a human-genome-wide RNAi screen. Functional clustering of the genes revealed a complex dependence of this virus on host cell physiology, requiring a wide variety of molecules and cellular pathways for successful infection. We further demonstrate a requirement for the ubiquitin ligase CBLL1 in WNV internalization, a post-entry role for the endoplasmic-reticulum-associated degradation pathway in viral infection, and the monocarboxylic acid transporter MCT4 as a viral replication resistance factor. By extending this study to dengue virus, we show that flaviviruses have both overlapping and unique interaction strategies with host cells. This study provides a comprehensive molecular portrait of WNV-human cell interactions that forms a model for understanding single plus-stranded RNA virus infection, and reveals potential antiviral targets.

Paul Ahlquist,  Akira Sakurai,  Chairul A. Nidom … (2008)
All viruses rely on host cell proteins and their associated mechanisms to complete the viral life cycle. Identifying the host molecules that participate in each step of virus replication could provide valuable new targets for antiviral therapy, but this goal may take several decades to achieve with conventional forward genetic screening methods and mammalian cell cultures. Here we describe a novel genome-wide RNA interference (RNAi) screen in Drosophila that can be used to identify host genes important for influenza virus replication. After modifying influenza virus to allow infection of Drosophila cells and detection of influenza virus gene expression, we tested an RNAi library against 13,071 genes (90% of the Drosophila genome), identifying over 100 for which suppression in Drosophila cells significantly inhibited or stimulated reporter gene (Renilla luciferase) expression from an influenza-virus-derived vector. The relevance of these findings to influenza virus infection of mammalian cells is illustrated for a subset of the Drosophila genes identified; that is, for three implicated Drosophila genes, the corresponding human homologues ATP6V0D1, COX6A1 and NXF1 are shown to have key functions in the replication of H5N1 and H1N1 influenza A viruses, but not vesicular stomatitis virus or vaccinia virus, in human HEK 293 cells. Thus, we have demonstrated the feasibility of using genome-wide RNAi screens in Drosophila to identify previously unrecognized host proteins that are required for influenza virus replication. This could accelerate the development of new classes of antiviral drugs for chemoprophylaxis and treatment, which are urgently needed given the obstacles to rapid development of an effective vaccine against pandemic influenza and the probable emergence of strains resistant to available drugs.