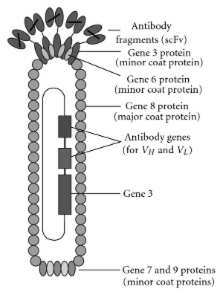 To date, generation of single-chain fragment variable (scFv) has become an established technique used to produce a completely functional antigen-binding fragment in bacterial systems. The advances in antibody engineering have now facilitated a more efficient and generally applicable method to produce Fv fragments. Basically, scFv antibodies produced from phage display can be genetically fused to the marker proteins, such as fluorescent proteins or alkaline phosphatase. These bifunctional proteins having both antigen-binding capacity and marker activity can be obtained from transformed bacteria and used for one-step immunodetection of biological agents. Alternatively, antibody fragments could also be applied in the construction of immunotoxins, therapeutic gene delivery, and anticancer intrabodies for therapeutic purposes. This paper provides an overview of the current studies on the principle, generation, and application of scFv. The potential of scFv in breast cancer research is also discussed in this paper.

Engineering hybrid genes without the use of restriction enzymes: gene splicing by overlap extension.

Timothy J. Pullen, Eric S. Ho, R. Pease … (1989)
Gene splicing by overlap extension is a new approach for recombining DNA molecules at precise junctions irrespective of nucleotide sequences at the recombination site and without the use of restriction endonucleases or ligase. Fragments from the genes that are to be recombined are generated in separate polymerase chain reactions (PCRs). The primers are designed so that the ends of the products contain complementary sequences. When these PCR products are mixed, denatured, and reannealed, the strands having the matching sequences at their 3' ends overlap and act as primers for each other. Extension of this overlap by DNA polymerase produces a molecule in which the original sequences are 'spliced' together. This technique is used to construct a gene encoding a mosaic fusion protein comprised of parts of two different class-I major histocompatibility genes. This simple and widely applicable approach has significant advantages over standard recombinant DNA techniques.

G. Smith (1985)
Foreign DNA fragments can be inserted into filamentous phage gene III to create a fusion protein with the foreign sequence in the middle. The fusion protein is incorporated into the virion, which retains infectivity and displays the foreign amino acids in immunologically accessible form. These "fusion phage" can be enriched more than 1000-fold over ordinary phage by affinity for antibody directed against the foreign sequence. Fusion phage may provide a simple way of cloning a gene when an antibody against the product of that gene is available.

J Huston, D. Levinson, M Mudgett-Hunter … (1988)
A biosynthetic antibody binding site, which incorporated the variable domains of anti-digoxin monoclonal antibody 26-10 in a single polypeptide chain (Mr = 26,354), was produced in Escherichia coli by protein engineering. This variable region fragment (Fv) analogue comprised the 26-10 heavy- and light-chain variable regions (VH and VL) connected by a 15-amino acid linker to form a single-chain Fv (sFv). The sFv was designed as a prolyl-VH-(linker)-VL sequence of 248 amino acids. A 744-base-pair DNA sequence corresponding to this sFv protein was derived by using an E. coli codon preference, and the sFv gene was assembled starting from synthetic oligonucleotides. The sFv polypeptide was expressed as a fusion protein in E. coli, using a leader derived from the trp LE sequence. The sFv protein was obtained by acid cleavage of the unique Asp-Pro peptide bond engineered at the junction of leader and sFv in the fusion protein [(leader)-Asp-Pro-VH-(linker)-VL]. After isolation and renaturation, folded sFv displayed specificity for digoxin and related cardiac glycosides similar to that of natural 26-10 Fab fragments. Binding between affinity-purified sFv and digoxin exhibited an association constant [Ka = (3.2 +/- 0.9) x 10(7) M-1] that was about a factor of 6 smaller than that found for 26-10 Fab fragments [Ka = (1.9 +/- 0.2) x 10(8) M-1] under the same buffer conditions, consisting of 0.01 M sodium acetate, pH 5.5/0.25 M urea.