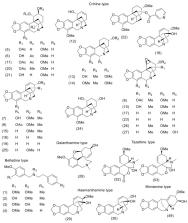 Nerine Herbert, family Amaryllidaceae, is a genus of about 30 species that are native to South Africa, Botswana, Lesotho, Namibia, and Swatini (formerly known as Swaziland). Species of Nerine are autumn-flowering, perennial, bulbous plants, which inhabit areas with summer rainfall and cool, dry winters. Most Nerine species have been cultivated for their elegant flowers, presenting a source of innumerable horticultural hybrids. For many years, species of Nerine have been subjected to extensive phytochemical and pharmacological investigations, which resulted in either the isolation or identification of more than fifty Amaryllidaceae alkaloids belonging to different structural types. Amaryllidaceae alkaloids are frequently studied for their interesting biological properties, including antiviral, antibacterial, antitumor, antifungal, antimalarial, analgesic, cytotoxic, and cholinesterase inhibition activities. The present review aims to summarize comprehensively the research that has been reported on the phytochemistry and pharmacology of the genus Nerine.

Crystal structure of human butyrylcholinesterase and of its complexes with substrate and products.

Patrick H. Masson,  Yvain Nicolet,  Florian Nachon … (2003)
Cholinesterases are among the most efficient enzymes known. They are divided into two groups: acetylcholinesterase, involved in the hydrolysis of the neurotransmitter acetylcholine, and butyrylcholinesterase of unknown function. Several crystal structures of the former have shown that the active site is located at the bottom of a deep and narrow gorge, raising the question of how substrate and products enter and leave. Human butyrylcholinesterase (BChE) has attracted attention because it can hydrolyze toxic esters such as cocaine or scavenge organophosphorus pesticides and nerve agents. Here we report the crystal structures of several recombinant truncated human BChE complexes and conjugates and provide a description for mechanistically relevant non-productive substrate and product binding. As expected, the structure of BChE is similar to a previously published theoretical model of this enzyme and to the structure of Torpedo acetylcholinesterase. The main difference between the experimentally determined BChE structure and its model is found at the acyl binding pocket that is significantly bigger than expected. An electron density peak close to the catalytic Ser(198) has been modeled as bound butyrate.

Jacques Dubois,  Antonio Evidente,  C Bruyère … (2009)
Twenty-two lycorine-related compounds were investigated for in vitro antitumor activity using four cancer cell lines displaying different levels of resistance to proapoptotic stimuli and two cancer cell lines sensitive to proapoptotic stimuli. Lycorine and six of its congeners exhibited potency in the single-digit micromolar range, while no compound appeared more active than lycorine. Lycorine also displayed the highest potential (in vitro) therapeutic ratio, being at least 15 times more active against cancer than normal cells. Our studies also showed that lycorine exerts its in vitro antitumor activity through cytostatic rather than cytotoxic effects. Furthermore, lycorine provided significant therapeutic benefit in mice bearing brain grafts of the B16F10 melanoma model at nontoxic doses. Thus, the results of the current study make lycorine an excellent lead for the generation of compounds able to combat cancers, which are naturally resistant to proapoptotic stimuli, such as glioblastoma, melanoma, non-small-cell-lung cancers, and metastatic cancers, among others.

A subfamilial classification for the expanded asparagalean families Amaryllidaceae, Asparagaceae and Xanthorrhoeaceae