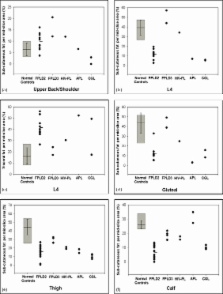 Expert Panel on Detection, Evaluation, and Treatment of High Blood Cholesterol in Adults (2001)

R Hegele,  H-Z Cao (2000)
Patients with Dunnigan-type familial partial lipodystrophy (FPLD) are born with normal fat distribution, but after puberty experience regional and progressive adipocyte degeneration, often associated with profound insulin resistance and diabetes. Recently, the FPLD gene was mapped to chromosome 1q21-22, which harbours the LMNA gene encoding nuclear lamins A and C. Mutations in LMNA were shown to underlie autosomal dominant Emery-Dreifuss muscular dystrophy (EDMD-AD), which is characterized by regional and progressive skeletal muscle wasting and cardiac effects. We hypothesized that the analogy between the regional muscle wasting in EDMD-AD and the regional adipocyte degeneration in FPLD, in addition to its chromosomal localization, made LMNA a good candidate gene for FPLD. DNA sequencing of LMNA in five Canadian FPLD probands indicated that each had a novel missense mutation, R482Q, which co-segregated with the FPLD phenotype and was absent from 2000 normal alleles ( P = 1.1 x 10(-13)). This is the first report of a mutation underlying a degenerative disorder of adipose tissue and suggests that LMNA mutations could underlie other diseases characterized by tissue type- and anatomical site-specific cellular degeneration.

B Schnoedt,  Jonathan C. Claussen,  Claus Thamer … (2005)
To assess standardized whole body adipose tissue topography in a cohort of subjects at an increased risk for type 2 diabetes and to compare fat distribution in subgroups regarding anthropometric (age, body mass index [BMI]) and metabolic parameters (insulin sensitivity). A total of 80 volunteers (40 females, 40 males) underwent T1-weighted MR imaging of the entire body. Standardized adipose tissue (AT) profiles were calculated considering the different body structure of the participants. The measured data were interpolated to a defined number of sampling points enabling a direct comparison of the profiles independent on body structure. Resulting mean profiles and region-dependent standard deviations of four age groups and three BMI-groups were compared for females and males. Correlations between insulin sensitivity and body fat distribution were analyzed. Reliable adipose tissue profiles could be obtained from all volunteers. In BMI-matched subgroups, females show significant higher AT and subcutaneous abdominal AT (P < 0.05 both), but lower visceral AT (P < 0.01) compared to the males. Furthermore, visceral AT increases with age, as shown in the matched age groups. In both gender groups, insulin-resistant subjects are characterized by higher visceral adipose tissue (VAT) compared to insulin-sensitive subjects. In addition, profiles of insulin-resistant subjects show more AT in the shoulder/neck region but less AT in the upper extremities. Standardized assessment of whole body AT profiles based on T1-weighted MRI provides a reliable basis for interindividual comparison of the body fat distribution and allows a fast and reliable quantification of total body adipose tissue and the distribution of different AT components as subcutaneous and visceral fat in different body regions. Differences in standardized profiles might enable an early identification of people at risk of metabolic disorders, as not only the amount but also the distribution of AT is expected to play an essential role in the pathogenesis of metabolic diseases. Copyright 2005 Wiley-Liss, Inc.