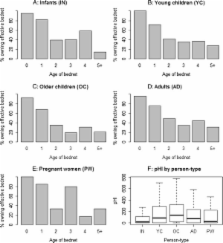 Despite the extensive ownership and use of insecticide-treated nets (ITNs) over the last decade, the effective lifespan of these nets, especially their physical integrity, under true operational conditions is not well-understood. Usefulness of nets declines primarily due to physical damage or loss of insecticidal activity.

A community based cross-sectional survey was used to determine the physical condition and to identify predictors of poor physical condition for bed nets owned by individuals from communities in Kwale County, coastal Kenya. A proportionate hole index (pHI) was used as a standard measure, and the cut-offs for an ‘effective net’ (offer substantial protection against mosquito bites) and ‘ineffective nets’ (offer little or no protection against mosquito bites) were determined (pHI ≤88 (about ≤500 cm 2 of holes surface area) and pHI of >88 (≥500 cm 2 of holes surface area), respectively).

The vast majority (78%) of the surveyed nets had some holes. The median pHI was 92 (range: 1–2,980). Overall, half of the nets were categorized as ‘effective nets’ or ‘serviceable nets’. Physical deterioration of nets was associated with higher use and washing frequency. Young children and older children were found to use ineffective bed nets significantly more often than infants, while the physical integrity of nets owned by pregnant women was similar to those owned by infants. Estuarine environment inhabitants owned nets with the worst physical condition, while nets owned by the coastal slope inhabitants were in fairly good physical condition. The results suggest that bed nets are optimally utilized when they are new and physically intact. Thereafter, bed net utilization decreases gradually with increasing physical deterioration, with most net owners withdrawing physically damaged nets from routine use.

This withdrawal commonly happens following 1.5 years of use, making bed net use the most important predictor of physical integrity. On average, the nets were washed twice within six months prior to the survey. Washing frequency was significantly influenced by the bed net colour and bed net age. Lack of knowledge on reasons for net retreatment and the retreatment procedure was evident, while net repair was minimal and did not seem to improve the physical condition of the nets. The “catch-up” bed net distribution strategies are sufficient for ensuring adequate ownership and utilization of ‘effective nets’ in the targeted groups, but bi-annual mass distribution is necessary to provide similar ownership and utilization for the other groups not targeted by “catch-up” strategies.

Monitoring and maintenance strategies that will deliver locally appropriate education messages on net washing and repair will enhance the effectiveness of malaria control programmes, and further research to assess ineffective nets need is needed.

Pyrethroid resistance in African anopheline mosquitoes: what are the implications for malaria control?

Raphael N’Guessan,  Hilary Ranson,  Nicolas Moiroux … (2011)
The use of pyrethroid insecticides in malaria vector control has increased dramatically in the past decade through the scale up of insecticide treated net distribution programmes and indoor residual spraying campaigns. Inevitably, the major malaria vectors have developed resistance to these insecticides and the resistance alleles are spreading at an exceptionally rapid rate throughout Africa. Although substantial progress has been made on understanding the causes of pyrethroid resistance, remarkably few studies have focused on the epidemiological impact of resistance on current malaria control activities. As we move into the malaria eradication era, it is vital that the implications of insecticide resistance are understood and strategies to mitigate these effects are implemented. Copyright © 2010 Elsevier Ltd. All rights reserved.

Spatial and temporal heterogeneity of Anopheles mosquitoes and Plasmodium falciparum transmission along the Kenyan coast.

J Githure,  James Regens,  Joseph Keating … (2003)
The seasonal dynamics and spatial distributions of Anopheles mosquitoes and Plasmodium falciparum parasites were studied for one year at 30 villages in Malindi, Kilifi, and Kwale Districts along the coast of Kenya. Anopheline mosquitoes were sampled inside houses at each site once every two months and malaria parasite prevalence in local school children was determined at the end of the entomologic survey. A total of 5,476 Anopheles gambiae s.l. and 3,461 An. funestus were collected. Species in the An. gambiae complex, identified by a polymerase chain reaction, included 81.9% An. gambiae s.s., 12.8% An. arabiensis, and 5.3% An. merus. Anopheles gambiae s.s. contributed most to the transmission of P. falciparum along the coast as a whole, while An. funestus accounted for more than 50% of all transmission in Kwale District. Large spatial heterogeneity of transmission intensity (< 1 up to 120 infective bites per person per year) resulted in correspondingly large and significantly related variations in parasite prevalence (range = 38-83%). Thirty-two percent of the sites (7 of 22 sites) with malaria prevalences ranging from 38% to 70% had annual entomologic inoculation rates (EIR) less than five infective bites per person per year. Anopheles gambiae s.l. and An. funestus densities in Kwale were not significantly influenced by rainfall. However, both were positively correlated with rainfall one and three months previously in Malindi and Kilifi Districts, respectively. These unexpected variations in the relationship between mosquito populations and rainfall suggest environmental heterogeneity in the predominant aquatic habitats in each district. One important conclusion is that the highly non-linear relationship between EIRs and prevalence indicates that the consistent pattern of high prevalence might be governed by substantial variation in transmission intensity measured by entomologic surveys. The field-based estimate of entomologic parameters on a district level does not provide a sensitive indicator of transmission intensity in this study.