Mortality Trends in Colorectal Cancer in China During 2000–2015: A Joinpoint Regression and Age-Period-Cohort Analysis 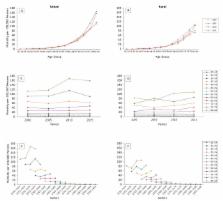 As lifestyles have increasingly become westernized in China, public health strategies have increasingly focused on cancer prevention. The objective of this study was to describe trends in colorectal cancer (CRC) mortality and the age, period, and cohort effects of CRC mortality in urban and rural China from 2000 to 2015.

More interventions to reduce the burden of CRC should be conducted, and it is more necessary for older people and urban residents to adopt a healthy lifestyle in China.

Jacques Ferlay,  Isabelle Soerjomataram,  Rajesh Dikshit … (2015)
Estimates of the worldwide incidence and mortality from 27 major cancers and for all cancers combined for 2012 are now available in the GLOBOCAN series of the International Agency for Research on Cancer. We review the sources and methods used in compiling the national cancer incidence and mortality estimates, and briefly describe the key results by cancer site and in 20 large "areas" of the world. Overall, there were 14.1 million new cases and 8.2 million deaths in 2012. The most commonly diagnosed cancers were lung (1.82 million), breast (1.67 million), and colorectal (1.36 million); the most common causes of cancer death were lung cancer (1.6 million deaths), liver cancer (745,000 deaths), and stomach cancer (723,000 deaths). © 2014 UICC.

Wanqing Chen,  Rongshou Zheng,  Peter D Baade … (2016)
With increasing incidence and mortality, cancer is the leading cause of death in China and is a major public health problem. Because of China's massive population (1.37 billion), previous national incidence and mortality estimates have been limited to small samples of the population using data from the 1990s or based on a specific year. With high-quality data from an additional number of population-based registries now available through the National Central Cancer Registry of China, the authors analyzed data from 72 local, population-based cancer registries (2009-2011), representing 6.5% of the population, to estimate the number of new cases and cancer deaths for 2015. Data from 22 registries were used for trend analyses (2000-2011). The results indicated that an estimated 4292,000 new cancer cases and 2814,000 cancer deaths would occur in China in 2015, with lung cancer being the most common incident cancer and the leading cause of cancer death. Stomach, esophageal, and liver cancers were also commonly diagnosed and were identified as leading causes of cancer death. Residents of rural areas had significantly higher age-standardized (Segi population) incidence and mortality rates for all cancers combined than urban residents (213.6 per 100,000 vs 191.5 per 100,000 for incidence; 149.0 per 100,000 vs 109.5 per 100,000 for mortality, respectively). For all cancers combined, the incidence rates were stable during 2000 through 2011 for males (+0.2% per year; P = .1), whereas they increased significantly (+2.2% per year; P < .05) among females. In contrast, the mortality rates since 2006 have decreased significantly for both males (-1.4% per year; P < .05) and females (-1.1% per year; P < .05). Many of the estimated cancer cases and deaths can be prevented through reducing the prevalence of risk factors, while increasing the effectiveness of clinical care delivery, particularly for those living in rural areas and in disadvantaged populations.

Rebecca Siegel,  Kimberly D Miller,  Stacey Fedewa … (2017)
Colorectal cancer (CRC) is one of the most common malignancies in the United States. Every 3 years, the American Cancer Society provides an update of CRC incidence, survival, and mortality rates and trends. Incidence data through 2013 were provided by the Surveillance, Epidemiology, and End Results program, the National Program of Cancer Registries, and the North American Association of Central Cancer Registries. Mortality data through 2014 were provided by the National Center for Health Statistics. CRC incidence rates are highest in Alaska Natives and blacks and lowest in Asian/Pacific Islanders, and they are 30% to 40% higher in men than in women. Recent temporal patterns are generally similar by race and sex, but differ by age. Between 2000 and 2013, incidence rates in adults aged ≥50 years declined by 32%, with the drop largest for distal tumors in people aged ≥65 years (incidence rate ratio [IRR], 0.50; 95% confidence interval [95% CI], 0.48-0.52) and smallest for rectal tumors in ages 50 to 64 years (male IRR, 0.91; 95% CI, 0.85-0.96; female IRR, 1.00; 95% CI, 0.93-1.08). Overall CRC incidence in individuals ages ≥50 years declined from 2009 to 2013 in every state except Arkansas, with the decrease exceeding 5% annually in 7 states; however, rectal tumor incidence in those ages 50 to 64 years was stable in most states. Among adults aged <50 years, CRC incidence rates increased by 22% from 2000 to 2013, driven solely by tumors in the distal colon (IRR, 1.24; 95% CI, 1.13-1.35) and rectum (IRR, 1.22; 95% CI, 1.13-1.31). Similar to incidence patterns, CRC death rates decreased by 34% among individuals aged ≥50 years during 2000 through 2014, but increased by 13% in those aged <50 years. Progress against CRC can be accelerated by increasing initiation of screening at age 50 years (average risk) or earlier (eg, family history of CRC/advanced adenomas) and eliminating disparities in high-quality treatment. In addition, research is needed to elucidate causes for increasing CRC in young adults. CA Cancer J Clin 2017. © 2017 American Cancer Society. CA Cancer J Clin 2017;67:177-193. © 2017 American Cancer Society.