The molecular pathogenesis of schwannomatosis, a paradigm for the co-involvement of multiple tumour suppressor genes in tumorigenesis 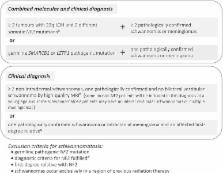 Schwannomatosis is characterized by the predisposition to develop multiple schwannomas and, less commonly, meningiomas. Despite the clinical overlap with neurofibromatosis type 2 (NF2), schwannomatosis is not caused by germline NF2 gene mutations. Instead, germline mutations of either the SMARCB1 or LZTR1 tumour suppressor genes have been identified in 86% of familial and 40% of sporadic schwannomatosis patients. In contrast to patients with rhabdoid tumours, which are due to complete loss-of-function SMARCB1 mutations, individuals with schwannomatosis harbour predominantly hypomorphic SMARCB1 mutations which give rise to the synthesis of mutant proteins with residual function that do not cause rhabdoid tumours. Although biallelic mutations of SMARCB1 or LZTR1 have been detected in the tumours of patients with schwannomatosis, the classical two-hit model of tumorigenesis is insufficient to account for schwannoma growth, since NF2 is also frequently inactivated in these tumours. Consequently, tumorigenesis in schwannomatosis must involve the mutation of at least two different tumour suppressor genes, an occurrence frequently mediated by loss of heterozygosity of large parts of chromosome 22q harbouring not only SMARCB1 and LZTR1 but also NF2. Thus, schwannomatosis is paradigmatic for a tumour predisposition syndrome caused by the concomitant mutational inactivation of two or more tumour suppressor genes. This review provides an overview of current models of tumorigenesis and mutational patterns underlying schwannomatosis that will ultimately help to explain the complex clinical presentation of this rare disease.

R A Knudson (1971)
Based upon observations on 48 cases of retinoblastoma and published reports, the hypothesis is developed that retinoblastoma is a cancer caused by two mutational events. In the dominantly inherited form, one mutation is inherited via the germinal cells and the second occurs in somatic cells. In the nonhereditary form, both mutations occur in somatic cells. The second mutation produces an average of three retinoblastomas per individual inheriting the first mutation. Using Poisson statistics, one can calculate that this number (three) can explain the occasional gene carrier who gets no tumor, those who develop only unilateral tumors, and those who develop bilateral tumors, as well as explaining instances of multiple tumors in one eye. This value for the mean number of tumors occurring in genetic carriers may be used to estimate the mutation rate for each mutation. The germinal and somatic rates for the first, and the somatic rate for the second, mutation, are approximately equal. The germinal mutation may arise in some instances from a delayed mutation.

Germ-line and acquired mutations of INI1 in atypical teratoid and rhabdoid tumors.

D Evans (2009)
Neurofibromatosis type 2 (NF2) is a tumour-prone disorder characterised by the development of multiple schwannomas and meningiomas. Prevalence (initially estimated at 1: 200,000) is around 1 in 60,000. Affected individuals inevitably develop schwannomas, typically affecting both vestibular nerves and leading to hearing loss and deafness. The majority of patients present with hearing loss, which is usually unilateral at onset and may be accompanied or preceded by tinnitus. Vestibular schwannomas may also cause dizziness or imbalance as a first symptom. Nausea, vomiting or true vertigo are rare symptoms, except in late-stage disease. The other main tumours are schwannomas of the other cranial, spinal and peripheral nerves; meningiomas both intracranial (including optic nerve meningiomas) and intraspinal, and some low-grade central nervous system malignancies (ependymomas). Ophthalmic features are also prominent and include reduced visual acuity and cataract. About 70% of NF2 patients have skin tumours (intracutaneous plaque-like lesions or more deep-seated subcutaneous nodular tumours). Neurofibromatosis type 2 is a dominantly inherited tumour predisposition syndrome caused by mutations in the NF2 gene on chromosome 22. More than 50% of patients represent new mutations and as many as one-third are mosaic for the underlying disease-causing mutation. Although truncating mutations (nonsense and frameshifts) are the most frequent germline event and cause the most severe disease, single and multiple exon deletions are common. A strategy for detection of the latter is vital for a sensitive analysis. Diagnosis is based on clinical and neuroimaging studies. Presymptomatic genetic testing is an integral part of the management of NF2 families. Prenatal diagnosis and pre-implantation genetic diagnosis is possible. The main differential diagnosis of NF2 is schwannomatosis. NF2 represents a difficult management problem with most patients facing substantial morbidity and reduced life expectancy. Surgery remains the focus of current management although watchful waiting with careful surveillance and occasionally radiation treatment have a role. Prognosis is adversely affected by early age at onset, a higher number of meningiomas and having a truncating mutation. In the future, the development of tailored drug therapies aimed at the genetic level are likely to provide huge improvements for this devastating condition.