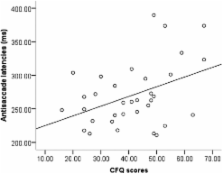 Individuals reporting high levels of distractibility in everyday life show impaired performance in standard laboratory tasks measuring selective attention and inhibitory processes. Similarly, increasing cognitive load leads to more errors/distraction in a variety of cognitive tasks. How these two factors interact is currently unclear; highly distractible individuals may be affected more when their cognitive resources are taxed, or load may linearly affect performance for all individuals. We investigated the relationship between self-reported levels of cognitive failures (CF) in daily life and performance in the antisaccade task, a widely used tool examining attentional control. Levels of concurrent cognitive demand were manipulated using a secondary auditory discrimination task. We found that both levels of self-reported CF and task load increased antisaccade latencies while having no effect on prosaccade eye-movements. However individuals rating themselves as suffering few daily life distractions showed a comparable load cost to those who experience many. These findings suggest that the likelihood of distraction is governed by the addition of both internal susceptibility and the external current load placed on working memory.

The Cognitive Failures Questionnaire (CFQ) and its correlates.

R. Parkes,  Anthony P. Fitzgerald,  Marcus P. Cooper … (1982)
This paper describes a questionnaire measure of self-reported failures in perception, memory, and motor function. Responses to all questions tend to be positively correlated, and the whole questionnaire correlates with other recent measures of self-reported deficit in memory, absent-mindedness, or slips of action. The questionnaire is however only weakly correlated with indices of social desirability set or of neuroticism. It is significantly correlated with ratings of the respondent by his or her spouse, and accordingly does have some external significance rather than purely private opinion of the self. The score is reasonably stable over long periods, to about the same extent as traditional measures of trait rather than state. Furthermore, it has not thus far been found to change in persons exposed to life-stresses. However, it does frequently correlate with the number of current psychiatric symptoms reported by the same person on the MHQ; and in one study it has been found that CFQ predicts subsequent MHQ in persons who work at a stressful job in the interval. It does not do so in those who work in a less stressful environment. The most plausible view is that cognitive failure makes a person vulnerable to showing bad effects of stress, rather than itself resulting from stress.

A controlled-attention view of working-memory capacity.

The antisaccade task as a research tool in psychopathology: a critical review.

Ulrich Ettinger,  S Hutton (2006)
The antisaccade task is a measure of volitional control of behavior sensitive to fronto-striatal dysfunction. Here we outline important issues concerning antisaccade methodology, consider recent evidence of the cognitive processes and neural mechanisms involved in task performance, and review how the task has been applied to study psychopathology. We conclude that the task yields reliable and sensitive measures of the processes involved in resolving the conflict between volitional and reflexive behavioral responses, a key cognitive deficit relevant to a number of neuropsychiatric conditions. Additionally, antisaccade deficits may reflect genetic liability for schizophrenia. Finally, the ease and accuracy with which the task can be administered, combined with its sensitivity to fronto-striatal dysfunction and the availability of suitable control conditions, may make it a useful benchmark tool for studies of potential cognitive enhancers.