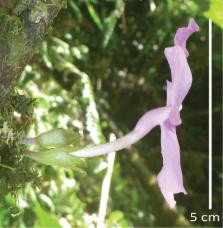 Brunfelsia cabiesesiana J. G. Graham, sp. nov. ( Solanaceae ), a new species from montane cloud forests of Ucayali and Pasco Departments, Peru, is described and illustrated. The new species differs from all other members of the genus Brunfelsia by its cauline inflorescences. A key to the Peruvian species of Brunfelsia is presented.

The Role of Competition in the Distribution of Andean Birds

A molecular phylogeny of the Solanaceae

Brunfelsia (Solanaceae): a genus evenly divided between South America and radiations on Cuba and other Antillean islands.

Natalia Filipowicz,  Susanne S. Renner (2012)
Hallucinogenic or toxic species of Brunfelsia (Solanaceae: Petunieae) are important in native cultures throughout South America, and the genus also contains several horticulturally important species. An earlier morphological revision of the c. 50 species recognized three main groups, one consisting of the 23 Antillean species, another of southern South American and Andean species, and a third of species from the Amazon Basin and Guiana Shield. Based on plastid and nuclear DNA sequences from up to 65 accessions representing 80% of the species, we generated a phylogeny and a calibrated chronogram for Brunfelsia to infer clade expansion and shifts in pollinators and fruit types. Brunfelsia flowers offer nectar, and attract lepidoptera, hummingbirds, or bees; the fruits are dry or fleshy. Our results imply that Brunfelsia is 16-21 Myr old and entered the Antilles from South America early during its history, with subsequent expansion along the island arc. The ancestor of the Antillean clade was hawk-moth-pollinated and had fleshy capsules, perhaps facilitating dispersal by birds. The only shift to hummingbird pollination occurred on Cuba, which also harbors the largest single radiation, with 11 species (10 included in our study) that apparently arose over the past 4 Myr. Jamaica, Hispaniola, and Puerto Rico each sustained smaller radiations. The data also reveal at least one new species. Copyright © 2012 Elsevier Inc. All rights reserved.