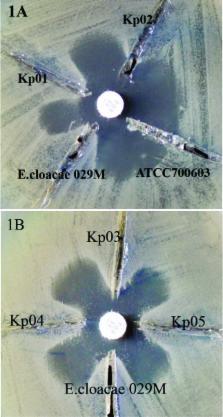 Clinical isolates of carbapenem-resistant Klebsiella pneumoniae ( K. pneumoniae) strains are being increased worldwide. Five pan-resistant K. pneumoniae strains have been isolated from respiratory and ICU wards in a Chinese hospital, and reveal strong resistance to all β-lactams, fluoroquinolones and aminoglycosides. Totally 27 β-lactamase genes and 2 membrane pore protein (porin) genes in 5 K. pneumoniae strains were screened by polymerase chain reaction (PCR). The results indicated that all of 5 K. pneumoniae strains carried blaTEM-1 and blaDHA-1 genes , as well as base deletion and mutation of OmpK35 or OmpK36 genes. Compared with carbapenem-sensitive isolates by sodium dodecyl sulfate-polyacrylamide gel electrophoresis (SDS-PAGE), the resistant isolates markedly lacked the protein band of 34–40 kDa, which might be the outer membrane proteins of OmpK36 according to the electrophoresis mobility. In addition, the conjugation test was confirmed that blaDHA-1 mediated by plasmids could be transferred between resistant and sensitive strains. When reserpine (30 μg/mL) and carbonyl cyanide m-chlorophenylhydrazone (CCCP) (50 μg/mL) were added in imipenem and meropenem, the MICs had no change against K. pneumoniae strains. These results suggest that both DHA-1 β-lactamase and loss or deficiency of porin OmpK36 may be the main reason for the cefoxitin and carbapenem resistance in K. pneumoniae strains in our hospital.

Laura Piddock (2006)
Efflux pump genes and proteins are present in both antibiotic-susceptible and antibiotic-resistant bacteria. Pumps may be specific for one substrate or may transport a range of structurally dissimilar compounds (including antibiotics of multiple classes); such pumps can be associated with multiple drug (antibiotic) resistance (MDR). However, the clinical relevance of efflux-mediated resistance is species, drug, and infection dependent. This review focuses on chromosomally encoded pumps in bacteria that cause infections in humans. Recent structural data provide valuable insights into the mechanisms of drug transport. MDR efflux pumps contribute to antibiotic resistance in bacteria in several ways: (i) inherent resistance to an entire class of agents, (ii) inherent resistance to specific agents, and (iii) resistance conferred by overexpression of an efflux pump. Enhanced efflux can be mediated by mutations in (i) the local repressor gene, (ii) a global regulatory gene, (iii) the promoter region of the transporter gene, or (iv) insertion elements upstream of the transporter gene. Some data suggest that resistance nodulation division systems are important in pathogenicity and/or survival in a particular ecological niche. Inhibitors of various efflux pump systems have been described; typically these are plant alkaloids, but as yet no product has been marketed.

Neil Woodford,  David M. Livermore,  Michel Doumith … (2009)
The aim of this study was to investigate relatedness and molecular mechanism(s) of ertapenem resistance in clinical isolates of Klebsiella spp. (n = 28) and Enterobacter spp. (n = 27) referred from multiple hospitals to the UK national reference laboratory. Investigations included genotyping by PFGE, resistance gene analysis by PCR and antimicrobial susceptibility testing with and without inhibitors of efflux and beta-lactamase activity. Outer membrane proteins (OMPs) were profiled by SDS-PAGE; porin genes were sequenced and their expression was examined by RT-PCR. The contribution of porin deficiency to resistance was investigated by restoring functional porin genes on plasmids. PFGE showed significant clonal diversity among ertapenem-resistant isolates, with only small clusters identified. SHV- and CTX-M-type extended-spectrum beta-lactamases were identified in the Klebsiella spp. isolates, whereas AmpC overexpression or KPC carbapenemase was detected in the Enterobacter cloacae isolates. SDS-PAGE showed that Klebsiella pneumoniae and Enterobacter aerogenes with high-level ertapenem resistance (MICs > or = 16 mg/L) consistently lacked both of the two major non-specific porins, whereas variable patterns of OmpC and OmpF were seen in E. cloacae with lower-level ertapenem resistance. Various point mutations or insertion sequences were identified as disrupting the porin-coding sequences, as well as mutations in the promoter region. Functional restoration of OmpK35 or OmpK36 in Klebsiella and OmpC or OmpF in Enterobacter spp. isolates significantly decreased the MICs of all carbapenems, but particularly of ertapenem. We found no evidence of efflux contributing to resistance. Ertapenem resistance was exclusively due to combinations of beta-lactamases with impermeability caused by loss of OMPs. Efflux was not implicated and there was no national spread of resistant clones.

Bruno Périchon,  Sébastien Coyne,  Patrice Courvalin … (2010)
Acinetobacter baumannii is a major nosocomial pathogen which frequently develops multidrug resistance by acquisition of antibiotic resistance genes and overexpression of intrinsic efflux systems, such as the RND efflux pumps AdeABC and AdeIJK. A third RND system was characterized by studying spontaneous mutants BM4663 and BM4664, which were selected in the presence of chloramphenicol and norfloxacin, respectively, from the AdeABC- and AdeIJK-defective derivative A. baumannii BM4652. They exhibited enhanced resistance to fluoroquinolones, tetracycline-tigecycline, chloramphenicol, clindamycin, trimethoprim, sulfamethoxazole, sodium dodecyl sulfate, and dyes such as ethidium bromide, safranin O, and acridine orange. Comparison of transcriptomes of mutants with that of their parental strain, using a microarray technology, demonstrated the overexpression of three genes that encoded an RND efflux system, named AdeFGH. Inactivation of AdeFGH in BM4664 restored an antibiotic susceptibility profile identical to that of BM4652, indicating that AdeFGH was cryptic in BM4652 and responsible for multidrug resistance in its mutants. RNA analysis demonstrated that the three genes were cotranscribed. The adeFGH operon was found in 36 out of 40 A. baumannii clinical isolates, but none of the 22 isolates tested overexpressed the pump genes. Spontaneous MDR mutant BM4684, overexpressing adeFGH, was obtained from clinical isolate BM4587, indicating that adeFGH can be overexpressed in a strain harboring adeABC-adeIJK. An open reading frame, coding a LysR-type transcriptional regulator, named adeL, was located upstream from the adeFGH operon and transcribed in the opposite direction. Mutations in adeL were found in the three adeFGH-overexpressing mutants, suggesting that they were responsible for overexpression of AdeFGH.

All the content of the journal, except where otherwise noted, is licensed under a Creative Commons License CC BY-NC.