Global Burden of Sickle Cell Anaemia in Children under Five, 2010–2050: Modelling Based on Demographics, Excess Mortality, and Interventions 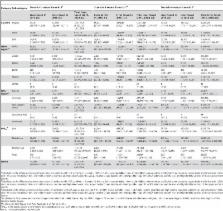 Frédéric Piel and colleagues combine national sickle cell anemia (SCA) frequencies with projected demographic data to estimate the number of SCA births in children under five globally from 2010 to 2050, and then estimate the number of lives that could be be saved following implementation of specific health interventions starting in 2015.

The global burden of sickle cell anaemia (SCA) is set to rise as a consequence of improved survival in high-prevalence low- and middle-income countries and population migration to higher-income countries. The host of quantitative evidence documenting these changes has not been assembled at the global level. The purpose of this study is to estimate trends in the future number of newborns with SCA and the number of lives that could be saved in under-five children with SCA by the implementation of different levels of health interventions.

Our quantitative approach confirms that the global burden of SCA is increasing, and highlights the need to develop specific national policies for appropriate public health planning, particularly in low- and middle-income countries. Further empirical collaborative epidemiological studies are vital to assess current and future health care needs, especially in Nigeria, the Democratic Republic of the Congo, and India.

More than seven million babies are born each year with a structural or functional abnormality. Although some birth defects are caused by environmental factors, many are caused by the inheritance of a defective gene. One common inherited birth defect is sickle cell anemia (SCA). SCA arises when a baby inherits the gene for sickle hemoglobin (HbS), a structural variant of normal adult hemoglobin (HbA, the protein in the disc-shaped red blood cells that carry oxygen round the body), from both its parents. Every cell in the human body contains two full sets of genes, and babies inherit one set of genes from each parent. The parents usually each have one HbS gene and one HbA gene, and are unaffected. However, the red blood cells of their offspring who inherit two copies of HbS develop a sickle (crescent) shape. Sickle cells can block blood vessels in the limbs and organs and have a shorter lifespan than normal red blood cells, which causes anemia. Together, these changes can cause acute pain and organ damage, and can increase the risk of severe infections. SCA can be prevented by prenatal diagnosis and managed by interventions such as the provision of antibiotics and vaccination to prevent infections.

Without early diagnosis and treatment, children with SCA often die within the first few years of life. Having one copy of the HbS gene provides people with protection from malaria, therefore SCA occurs mainly in low- and middle-income countries in tropical regions, where early diagnosis and treatment is often unavailable. Recent improvements in overall infant and childhood survival in these countries and population migration to higher-income countries mean that the global burden of SCA is likely to increase over the coming decades. To date, no one has tried to quantify this increase, although this information is needed to guide decisions on public health spending. In this modeling study, the researchers assess the size of the expected global burden of SCA between 2010 and 2050 in children under five years old and estimate the number of newborn lives that might be saved by implementation of various health interventions.

The researchers used estimates of national SCA frequencies and data on projected birth rates to calculate that the number of newborns with SCA will increase from about 305,800 in 2010 to about 404,200 in 2050. They estimated that Nigeria, the Democratic Republic of Congo (DRC), and India accounted for 57% of newborns with SCA in 2010, and that Nigeria and the DRC will probably still be the countries most in need of policies for the prevention and management of SCA in 2050. The researchers then assessed how many newborns might be saved by the implementation of various health measures in 2015 that affect excess mortality (the difference between the frequency of SCA in newborns and in five-year-olds divided by the frequency of SCA in newborns) among children born with SCA. Implementation of prenatal diagnosis and newborn screening programs, and provision of antibiotics and vaccinations (interventions assumed by the researchers to reduce excess mortality from 90% to 50% in low- and middle-income countries and from 10% to 5% in high-income countries) could prolong the life of more than five million newborns with SCA by 2050. Implementation of universal screening and provision of other specific measures predicted to reduce excess mortality to 5% and 0% in low-to-middle-income countries and high-income countries, respectively, could save nearly ten million lives by 2050.

In estimating the global burden of SCA in children under five years old between 2010 and 2050 and the number of newborn lives that could be saved by implementation of health interventions, the researchers made numerous assumptions reflected in the uncertainty associated with the projections. For example, they assumed that implementation of specific interventions would lead to an immediate reduction of excess mortality in newborns with SCA. The study's findings confirm, however, that the global burden of SCA is increasing and indicate that the implementation of specific interventions could extend the lives of millions of newborns with SCA. Although further studies are needed to assess the current and future health care needs of children with SCA, these findings highlight the need to develop and implement national public health planning and funding policies for SCA, particularly in low- and middle-income countries.

Neonatal, postneonatal, childhood, and under-5 mortality for 187 countries, 1970-2010: a systematic analysis of progress towards Millennium Development Goal 4.

Julie Knoll Rajaratnam,  Jake R. Marcus,  Abraham Flaxman … (2010)
Previous assessments have highlighted that less than a quarter of countries are on track to achieve Millennium Development Goal 4 (MDG 4), which calls for a two-thirds reduction in mortality in children younger than 5 years between 1990 and 2015. In view of policy initiatives and investments made since 2000, it is important to see if there is acceleration towards the MDG 4 target. We assessed levels and trends in child mortality for 187 countries from 1970 to 2010. We compiled a database of 16 174 measurements of mortality in children younger than 5 years for 187 countries from 1970 to 2009, by use of data from all available sources, including vital registration systems, summary birth histories in censuses and surveys, and complete birth histories. We used Gaussian process regression to generate estimates of the probability of death between birth and age 5 years. This is the first study that uses Gaussian process regression to estimate child mortality, and this technique has better out-of-sample predictive validity than do previous methods and captures uncertainty caused by sampling and non-sampling error across data types. Neonatal, postneonatal, and childhood mortality was estimated from mortality in children younger than 5 years by use of the 1760 measurements from vital registration systems and complete birth histories that contained specific information about neonatal and postneonatal mortality. Worldwide mortality in children younger than 5 years has dropped from 11.9 million deaths in 1990 to 7.7 million deaths in 2010, consisting of 3.1 million neonatal deaths, 2.3 million postneonatal deaths, and 2.3 million childhood deaths (deaths in children aged 1-4 years). 33.0% of deaths in children younger than 5 years occur in south Asia and 49.6% occur in sub-Saharan Africa, with less than 1% of deaths occurring in high-income countries. Across 21 regions of the world, rates of neonatal, postneonatal, and childhood mortality are declining. The global decline from 1990 to 2010 is 2.1% per year for neonatal mortality, 2.3% for postneonatal mortality, and 2.2% for childhood mortality. In 13 regions of the world, including all regions in sub-Saharan Africa, there is evidence of accelerating declines from 2000 to 2010 compared with 1990 to 2000. Within sub-Saharan Africa, rates of decline have increased by more than 1% in Angola, Botswana, Cameroon, Congo, Democratic Republic of the Congo, Kenya, Lesotho, Liberia, Rwanda, Senegal, Sierra Leone, Swaziland, and The Gambia. Robust measurement of mortality in children younger than 5 years shows that accelerating declines are occurring in several low-income countries. These positive developments deserve attention and might need enhanced policy attention and resources. Bill & Melinda Gates Foundation. Copyright 2010 Elsevier Ltd. All rights reserved.

Bacteraemia in Kenyan children with sickle-cell anaemia: a retrospective cohort and case–control study