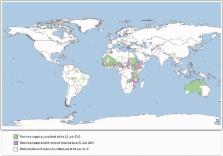 Purpose: To complete the baseline trachoma map worldwide by conducting population-based surveys in an estimated 1238 suspected endemic districts of 34 countries.

Methods: A series of national and sub-national projects owned, managed and staffed by ministries of health, conduct house-to-house cluster random sample surveys in evaluation units, which generally correspond to “health district” size: populations of 100,000–250,000 people. In each evaluation unit, we invite all residents aged 1 year and older from h households in each of c clusters to be examined for clinical signs of trachoma, where h is the number of households that can be seen by 1 team in 1 day, and the product h ×  c is calculated to facilitate recruitment of 1019 children aged 1–9 years. In addition to individual-level demographic and clinical data, household-level water, sanitation and hygiene data are entered into the purpose-built LINKS application on Android smartphones, transmitted to the Cloud, and cleaned, analyzed and ministry-of-health-approved via a secure web-based portal. The main outcome measures are the evaluation unit-level prevalence of follicular trachoma in children aged 1–9 years, prevalence of trachomatous trichiasis in adults aged 15 + years, percentage of households using safe methods for disposal of human feces, and percentage of households with proximate access to water for personal hygiene purposes.

Results: In the first year of fieldwork, 347 field teams commenced work in 21 projects in 7 countries.

Conclusion: With an approach that is innovative in design and scale, we aim to complete baseline mapping of trachoma throughout the world in 2015.

A simple system for the assessment of trachoma and its complications.

Jeffrey B. Jones,  B Thylefors,  Laura B K R Jones … (1986)
A simple grading system for trachoma, based on the presence or absence of five selected "key" signs, has been developed. The method was tested in the field and showed good observer agreement, the most critical point being the identification of severe cases of the disease. It is expected that the system will facilitate the assessment of trachoma and its complications by non-specialist health personnel working at the community level.

Effect of Water, Sanitation, and Hygiene on the Prevention of Trachoma: A Systematic Review and Meta-Analysis

Diagnosis and assessment of trachoma.

Anthony W. Solomon,  R Peeling,  Allen Foster … (2004)
Trachoma is caused by Chlamydia trachomatis. Clinical grading with the WHO simplified system can be highly repeatable provided graders are adequately trained and standardized. At the community level, rapid assessments are useful for confirming the absence of trachoma but do not determine the magnitude of the problem in communities where trachoma is present. New rapid assessment protocols incorporating techniques for obtaining representative population samples (without census preparation) may give better estimates of the prevalence of clinical trachoma. Clinical findings do not necessarily indicate the presence or absence of C. trachomatis infection, particularly as disease prevalence falls. The prevalence of ocular C. trachomatis infection (at the community level) is important because it is infection that is targeted when antibiotics are distributed in trachoma control campaigns. Methods to estimate infection prevalence are required. While culture is a sensitive test for the presence of viable organisms and nucleic acid amplification tests are sensitive and specific tools for the presence of chlamydial nucleic acids, the commercial assays presently available are all too expensive, too complex, or too unreliable for use in national programs. There is an urgent need for a rapid, reliable test for C. trachomatis to assist in measuring progress towards the elimination of trachoma.