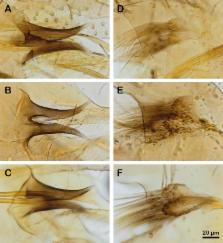 Phlebotomus riouxi Depaquit, Killick-Kendrick & Léger 1998 was described as a species closely related to Phlebotomus chabaudi Croset, Abonnenc & Rioux 1970, differing mainly by the size and number of setae of the coxite basal lobe. Molecular studies carried out on several populations from Algeria and Tunisia and based on mitochondrial genes cytochrome b (Cytb) and cytochrome oxidase I (COI) supported the typological validity of these two species. Recently, specimens from a single population in southern Tunisia were morphologically identified as Ph. riouxi, Ph. chabaudi and intermediates, but were clustered in the same clade according to their Cytb and nuclear gene elongation factor-1 α (EF-1α) sequences. These species were thus synonymized. To further explore this synonymy, we carried out a molecular study on specimens from Algeria and Tunisia using the same molecular markers and a part of 28S rDNA. We did not find any morphologically intermediate specimens in our sampling. We highlighted differences between the genetic divergence rates within and between the two species for the three markers and we identified new haplotypes. The sequence analysis did not reveal any signature of introgression in allopatric nor in sympatric populations such as in the Ghomrassen population. Phylogenetic analyses based on our specimens revealed that the two main clades are Ph. chabaudi and Ph. riouxi, in agreement with the morphological identification. These results support the validity of Ph. riouxi and Ph. chabaudi as typological species.

Lynn Dover (1982)
It is generally accepted that mutations may become fixed in a population by natural selection and genetic drift. In the case of many families of genes and noncoding sequences, however, fixation of mutations within a population may proceed as a consequence of molecular mechanisms of turnover within the genome. These mechanisms can be both random and directional in activity. There are circumstances in which the unusual concerted pattern of fixation permits the establishment of biological novelty and species discontinuities in a manner not predicted by the classical genetics of natural selection and genetic drift.

Karim Aoun,  Aïda Bouratbine (2014)
In North African countries, cutaneous leishmaniasis transmission has been increasing since the 1980s, with a significant increase in the incidence of cases and a spread of the geographical distribution. The disease currently represents a major public health problem with a productivity gap and an impediment for development, which results in dramatic socioeconomic and psycho-sanitary impacts. The incidence is more than thousands of cases every year in Algeria, Libya, Morocco, and Tunisia. In Egypt, only a few dozen cases per year are reported, mainly in the Sinai Peninsula. Three Leishmania species, associated with distinct eco-epidemiological and clinical patterns, are involved, namely Leishmania infantum, L. major, and L. tropica. However, L. major is by far the most frequent in Algeria, Libya, and Tunisia, with more than 90% of the registered cases. It is mainly encountered in rural areas under semi-arid, arid and Saharan climates. Leishmania tropica is more prevalent in Morocco, reaching 30–40% of isolates in some districts. Much data is still missing concerning the risk factors of the infection and the lesion development, as well as vector and reservoir ecology and behavior. The knowledge of such parameters, following multidisciplinary and integrated approaches, is crucial for better management and control of the disease, that also faces a lack of resources and efficient control measures.