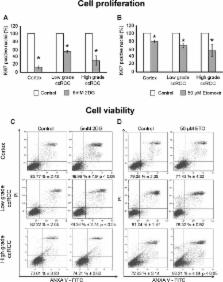 Clear cell renal cell carcinoma (ccRCC) has a poor prognosis despite novel biological targeted therapies. Tumor aggressiveness and poor survival may correlate with tumor grade at diagnosis and with complex metabolic alterations, also involving glucose and lipid metabolism. However, currently no grade-specific metabolic therapy addresses these alterations. Here we used primary cell cultures from ccRCC of low- and high-grade to investigate the effect on energy state and reduced pyridine nucleotide level, and on viability and proliferation, of specific inhibition of glycolysis with 2-deoxy-D-glucose (2DG), or fatty acid oxidation with Etomoxir. Our primary cultures retained the tissue grade-dependent modulation of lipid and glycogen storage and aerobic glycolysis (Warburg effect). 2DG affected lactate production, energy state and reduced pyridine nucleotide level in high-grade ccRCC cultures, but the energy state only in low-grade. Rather, Etomoxir affected energy state in high-grade and reduced pyridine nucleotide level in low-grade cultures. Energy state and reduced pyridine nucleotide level were evaluated by ATP and reduced 3-(4,5-dimethylthiazol-2-yl)-2,5-diphenyltetrazolium (MTT) dye quantification, respectively. 2DG treatment impaired cell proliferation and viability of low-grade ccRCC and normal cortex cultures, whereas Etomoxir showed a cytostatic and cytotoxic effect only in high-grade ccRCC cultures. Our data indicate that in ccRCC the Warburg effect is a grade-dependent feature, and fatty acid oxidation can be activated for different grade-dependent metabolic needs. A possible grade-dependent metabolic therapeutic approach in ccRCC is also highlighted.

Gavin Tan,  M J Berridge (1993)
The MTT assay, which is widely used to measure cell proliferation and to screen for anticancer drugs, is based on reduction of the tetrazolium salt, MTT (3-(4,5-dimethylthiazol-2-yl)-2,5-diphenyltetrazolium bromide) by actively growing cells to produce a blue formazan product. Despite broad acceptance of this assay, neither the subcellular localization, nor the biochemical events involved in MTT reduction are known. Mitochondrial involvement in MTT reduction has been inferred from studies with respiratory inhibitors using succinate as a substrate, but the contribution of this activity to overall cellular MTT reduction is unknown. Using the bone marrow-derived cell line, 32D, we investigated the subcellular localization of MTT reduction using succinate, NADH, and NADPH as substrates. At optimum substrate concentrations, MTT reduction by whole cell homogenates was greatest with NADH and least with succinate, which accounted for less than 10% of the combined activities. Using succinate, 96% of recoverable MTT reducing activity was in particulate fractions of the cell and 77% in the mitochondrial and light mitochondrial/lysosomal fractions. When NADH and NADPH were used as substrates, increased amounts of MTT reducing activity were associated with soluble fractions of the cell and association with mitochondrial fractions was less pronounced. To further characterize MTT reduction by the mitochondrial fraction, respiratory chain inhibitors were used to explore involvement of electron transport in MTT reduction. Succinate-dependent mitochondrial MTT reduction was inhibited by 80% with chlorpromazine, 70% by antimycin A, and 85-90% by thenoyltrifluoracetone (TTFA), but inhibition was not observed with rotenone at < or = 2 microM, Amytal, or azide. These results suggest that when succinate is used as an electron donor, 70-80% of mitochondrial MTT reduction occurs subsequent to transfer of electrons from cytochrome c to cytochrome oxidase, but prior to the point of azide inhibition. In contrast to succinate, NADPH-dependent mitochondrial MTT reduction was not affected by any of the respiratory inhibitors tested, and NADH-dependent reduction was only inhibited by chlorpromazine (40-50% at plateau concentrations). These results suggest that most cellular MTT reduction occurs outside the mitochondrial inner membrane and involves NADH and NADPH-dependent mechanisms that are insensitive to respiratory chain inhibitors. This interpretation is supported by whole cell studies in which rotenone failed to affect basal and interleukin-3-stimulated MTT reduction at times up to 4 h but strongly inhibited DNA synthesis. We conclude that most cellular reduction of MTT occurs extramitochondrially and probably involves the pyridine nucleotide cofactors NADH and NADPH.

A. Hakimi,  Ed Reznik,  Chung-Han Lee … (2016)
Dysregulated metabolism is a hallmark of cancer, manifested through alterations in metabolites. We performed metabolomic profiling on 138 matched clear cell renal cell carcinoma (ccRCC)/normal tissue pairs and found that ccRCC is characterized by broad shifts in central carbon metabolism, one-carbon metabolism, and antioxidant response. Tumor progression and metastasis were associated with metabolite increases in glutathione and cysteine/methionine metabolism pathways. We develop an analytic pipeline and visualization tool (metabolograms) to bridge the gap between TCGA transcriptomic profiling and our metabolomic data, which enables us to assemble an integrated pathway-level metabolic atlas and to demonstrate discordance between transcriptome and metabolome. Lastly, expression profiling was performed on a high-glutathione cluster, which corresponds to a poor-survival subgroup in the ccRCC TCGA cohort.