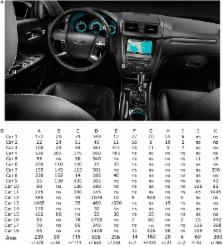 The human microbiome is influenced by a number of factors, including environmental exposure to microbes. Because many humans spend a large amount of time in built environments, it can be expected that the microbial ecology of these environments will influence the human microbiome. In an attempt to further understand the microbial ecology of built environments, the microbiota of car interiors was analyzed using culture dependent and culture independent methods. While it was found that the number and type of bacteria varied widely among the cars and sites tested, Staphylococcus and Propionibacterium were nearly always the dominant genera found at the locations sampled. Because Staphylococcus is of particular concern to human health, the characteristics of this genus found in car interiors were investigated. Staphylococcus epidermidis, S. aureus, and S. warnerii were the most prevalent staphylococcal species found, and 22.6% of S. aureus strains isolated from shared community vehicles were resistant to methicillin. The reduction in the prevalence of pathogenic bacteria in cars by using silver-based antimicrobial surface coatings was also evaluated. Coatings containing 5% silver ion additives were applied to steering wheels, placed in cars for five months and were found to eliminate the presence of culturable pathogenic bacteria recovered from these sites relative to controls. Together, these results provide new insight into the microbiota found in an important built environment, the automobile, and potential strategies for controlling the presence of human pathogens.

Jennifer Adams Krumins,  Lise Øvreås,  Judith L. Green … (2006)
We review the biogeography of microorganisms in light of the biogeography of macroorganisms. A large body of research supports the idea that free-living microbial taxa exhibit biogeographic patterns. Current evidence confirms that, as proposed by the Baas-Becking hypothesis, 'the environment selects' and is, in part, responsible for spatial variation in microbial diversity. However, recent studies also dispute the idea that 'everything is everywhere'. We also consider how the processes that generate and maintain biogeographic patterns in macroorganisms could operate in the microbial world.

Neil Klepeis,  W Nelson,  W Ott … (2016)
Because human activities impact the timing, location, and degree of pollutant exposure, they play a key role in explaining exposure variation. This fact has motivated the collection of activity pattern data for their specific use in exposure assessments. The largest of these recent efforts is the National Human Activity Pattern Survey (NHAPS), a 2-year probability-based telephone survey (n=9386) of exposure-related human activities in the United States (U.S.) sponsored by the U.S. Environmental Protection Agency (EPA). The primary purpose of NHAPS was to provide comprehensive and current exposure information over broad geographical and temporal scales, particularly for use in probabilistic population exposure models. NHAPS was conducted on a virtually daily basis from late September 1992 through September 1994 by the University of Maryland's Survey Research Center using a computer-assisted telephone interview instrument (CATI) to collect 24-h retrospective diaries and answers to a number of personal and exposure-related questions from each respondent. The resulting diary records contain beginning and ending times for each distinct combination of location and activity occurring on the diary day (i.e., each microenvironment). Between 340 and 1713 respondents of all ages were interviewed in each of the 10 EPA regions across the 48 contiguous states. Interviews were completed in 63% of the households contacted. NHAPS respondents reported spending an average of 87% of their time in enclosed buildings and about 6% of their time in enclosed vehicles. These proportions are fairly constant across the various regions of the U.S. and Canada and for the California population between the late 1980s, when the California Air Resources Board (CARB) sponsored a state-wide activity pattern study, and the mid-1990s, when NHAPS was conducted. However, the number of people exposed to environmental tobacco smoke (ETS) in California seems to have decreased over the same time period, where exposure is determined by the reported time spent with a smoker. In both California and the entire nation, the most time spent exposed to ETS was reported to take place in residential locations.

These authors contributed equally to the work.

This is an open access article distributed under the Supplemental Terms and Conditions for iOpenAccess articles published in Taylor & Francis journals , which permits unrestricted use, distribution, and reproduction in any medium, provided the original work is properly cited.